Amar'e Stoudemire: 'The Knicks Are Back'

Share All sharing options for: Amar'e Stoudemire: 'The Knicks Are Back'

While any new deals in the NBA cannot be officially announced until July 8, the Knicks are wasting little time making public their five-year, $100 million deal with free agent Amar'e Stoudemire.

Already, he is appearing on the marquee of Madison Square Garden, in a Knicks' uniform, no less -- via Howard Beck's Twitter -- a move that the PR department is quickly claiming was just to welcome him to New York for Monday's meeting with the team.

Then Stoudemire put on a Knicks hat and exclaimed, "The Knicks are back." Really. 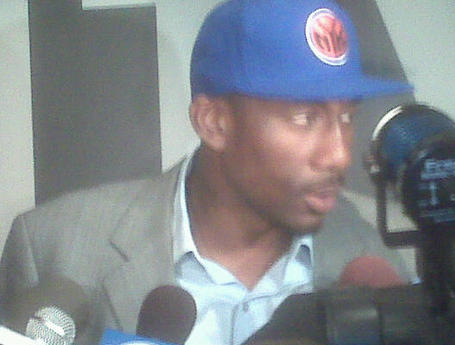 How this is legal per NBA rules I'm not sure, but it leaves little doubt about where Stoudemire is signing this offseason.