Share All sharing options for: Yikes: Martellus Bennett Is Osama Been Happenin'

Cowboys third-year tight end Martellus Bennett has a penchant for the outre when it comes to publicly goofing off online, a bent not much unlike those who spend their time typing away at certain sports blogs. Whether or not Marty B can point to those who indeed find his YouTube and Twitter antics funny, the line of acceptability isn't going to ultimately be drawn by the general public. It's up to the the Cowboys and the NFL to make that decision. â†µ 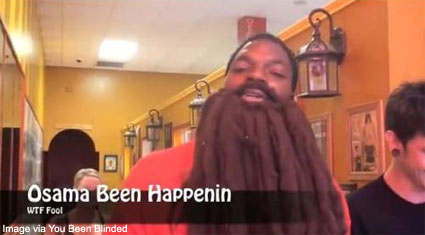 â†µIn the past, Bennett has been fined and reprimanded for posting borderline offensive videos on his YouTube account, most famously his Black Olympics video, which featured Bennett and a friend taking part in a series of events, including a fried chicken eating contest, clearly designed to play off stereotypes about African-Americans. The video, as all things Marty B related, was done with tongue firmly planted in cheek, but then it's always a delicate dance when a public figure does anything that touches upon longstanding stereotypes. â†µ

â†µThe same also definitely applies to identifying, even mockingly, with terrorists. So chances are Marty B will be hearing back from the Cowboys about his latest video - which he already pulled from his account after blogs began noticing it - in which he dons a fake beard and pronounces himself Osama Bin Happenin' while dancing around in what appears to be a tattoo parlor. That this Osama video was posted on July 4 won't exactly help matters. â†µ

â†µBennett probably isn't endangering his career with his off-color jokes, but he certainly isn't making things easier on him either. A marginable contributor who plays backup to one of the better pass catching tight ends in the league, Bennett hasn't done anything to show he isn't expendable for the Cowboys in his two seasons in Dallas. That he has willingly brought repeated minor public embarrassment to the team will make it all the easier for the Cowboys to eventually send him packing. â†µ