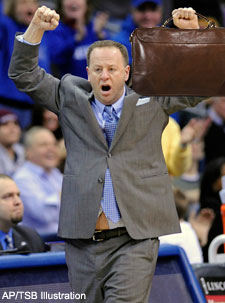 Bobby Gonzalez made an ugly exit from Seton Hall after this past season. His final game will be remembered for Herb Pope punching another player below the belt. Gonzalez himself will probably be most remembered for the ugly New York Times feature that was written about him. â†µ

â†µGonzalez is not going quietly into the night. No, he got into a spat with Fox Sports' Jeff Goodman at the NBA draft just a few weeks ago. Now Gonzalez has upped the ante by being charged with shoplifting at The Mall at Short Hills following an incident on June 29. Details via NorthJersey.com â†µ

â†µâ‡¥The satchel, valued at $1,395, was reportedly damaged in the area where a sensor tag had been attached. An investigation into the incident by the Millburn Detective Bureau resulted in an arrest warrant being issued for Robert P. Gonzalez, 47, of Harrison, N.Y., for allegedly removing the sensor device from the satchel and walking out of the store without paying for the item. â†µâ‡¥

â†µAfter surveying the incredibly pricey selection of men's Polo bags, it would seem one of these two bags were too good for Gonzalez to pass up: the Deerfield Vachetta Mailbag or the Deerfield Vachetta Messenger. Even after earning an NCAA coach's salary for years, that's still awfully expensive taste for a man who is currently unemployed.
â†µ
â†µUPDATE: The New York Times has the following quote from Gonzalez's lawyer, Gerald Krovatin: "This is a misunderstanding and series of miscommunications,” Krovatin said. “Bobby did not intend to steal anything."â†µ