Ego, thy name is LeBron

Share All sharing options for: Ego, thy name is LeBron 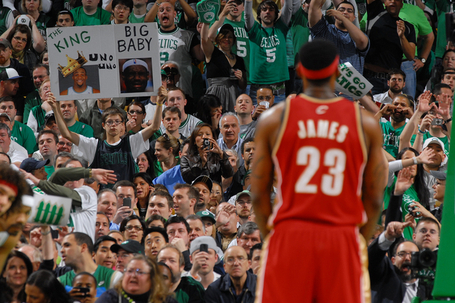 For years, one of the worst practices in all of sports is the yearly signing day announcements for college football and basketball stars. Every year, a select number of 18- and sometimes 17-year-old high school students will be pushed onto a podium, with microphones all around them, to fatefully announce which school they're going to play for by selecting which university cap to put on their head -- as though they're Julius Ceasar.

Sports are great, but at times they morph into self-aggrandizing performances of melodrama that blind athletes into thinking more of themselves than they really are. We've seen Latrell Sprewell turn down a million-dollar contract because, "I've got my family to feed"; we've seen multimillionaire Patrick Ewing participate in charity basketball games during the '98 lockout because, "We players make a lot of money, but we spend a lot of money too." And now, we've seen LeBron James, whose ego has risen so drastically this offseason that one can assume he's taken the nickname "King James" literally.

It's to be expected. James never went to college, and thus never had that experience of holding a televised press conference where the world anxiously waits for his to decision to be made. But now, James is getting a second chance. On Thursday, at 9 PM on ESPN, LeBron James will announce on national TV where he plans to spend the next five to six years of his life. But don't worry Cleveland fans, who are already nervous over potentially losing the one bright spot in the city's economy; the proceeds of the LEBRON JAMES SPECIAL ANNOUNCEMENT will be donated to charity.

The pomp and circumstance of it all has undermined the phenomenal talent that LeBron James truly is. There's no question that he's the most complete player in the NBA, having won back-to-back MVP awards and having taken a truly mediocre Cavaliers team to the finals in 2007. For years, fans have been speculating if the entrepreneur superstar that is LeBron would really return to Cleveland in 2010, considering the city's lack of flair and the team's lack of supporting players. Even President Obama commented that James would look great in a Bulls uniform.

And truth be told, most basketball fans outside of Cleveland could respect his decision to leave the city if it meant pairing with someone like Dwyane Wade or Chris Bosh, who could make whatever team he's on an instant contender. But James has taken it a step further by not only entertaining other offers, but by doing it in the loudest way possible. He's given flirting comment after comment about how much he loves Madison Square Garden, wore a Yankees cap to an Indians game, gave an interview with Larry King while the NBA Finals were still going on, refused to even speak to Michigan State coach Tom Izzo, who was seriously considering becoming the Cavs' coach. It's even been reported that James hasn't even left his Cleveland residence this offseason, that it's been the other way around -- teams have come to him and have a limited amount of time to give him a sales pitch (one hour) before they're dismissed.

It's the sort of thing Julius Ceasar did to gladiators thousands of years ago.

And now, the coup de grâce. This Thursday, LeBron James will become the first player in sports history to announce where he's signing on live television, in an event that he himself negotiated and asked for. ESPN, which hasn't had a successful non-sporting event primetime program since... ever, was happy to condense its previously-scheduled program, a two-hour World Cup wrap-up, to the 10 PM slot. What an honor it will be to us, the viewer to see the embodiment of greatness that is LeBron James. Sure, we could have read about LeBron James signing with the Heat or Nets or Knicks. But that would mean we wouldn't have been blessed with seeing the Chosen One, with his big Chosen hands, life up the Chosen hat of the team he's chosen to play with, on national TV, on ESPN, at 9 PM on Thursday. And we can't have that.

James has probably known for a long time which team he wants to play for, and the chances of his decision leaking by Wednesday or Thursday are very, very likely. So the only drama left will be to see how exactly it goes down. Will it be like the Oscars -- will LeBron go up to a podium, with a split-screen of six different teams, and then read from an envelope to announce the winner? Maybe it'll be like the Bachelor, where the winner gets the last rose from the bottom of his heart.

Or maybe, the live event will turn into a death match, where the owners of all the prospective teams -- Mikhail Prokhorov, Micky Arison, James Dolan -- will have to stave off a hoard of angry lions, with the last man standing proclaimed the winner. A long shot to be sure, but that's how Ceasar would have done it. And LeBron, you're no Julius Ceasar.