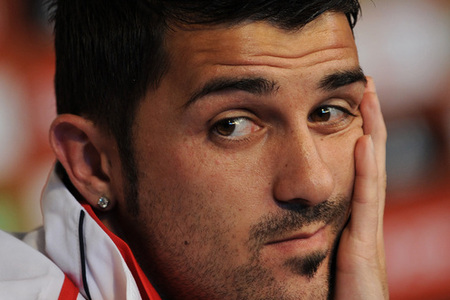 Conventional wisdom holds the German weakness in defense is in the middle, with a central pairing of Per Mertesacker and Arne Friedrich. Mertesacker presides over a Werder Bremen defense that is notoriously sketchy, while Friedrich has made his name as a fullback. As a pair they’ve seen very little time together, which may partially explain the nature the two goals Germany’s allowed in the tournament (Milan Jovanovich’s for Serbia and Matthew Upson’s for England). Then again, it’s only two goals in five matches, so if there is a weakness at the back, something must be augmenting (possibly protecting) them.

That something is Bastian Schweinsteiger and Sami Khedira, Germany’s two in their 4-2-3-1 - the pair that have kept Mertesacker and Friedrich in their tactically-created bubble. Against a Spain team with creative, middle-of-the-pitch players like Xavi Hernández and Andrés Iniesta, that protection becomes even more valuable and forces Spain to consider how they will get around them. At a minimum, Schweinsteiger and Khedira will crowd the area around the arc.

This is where Vincente del Bosque’s probable inclusion of Pedro Rodríguez comes into play. With Fernando Torres’s ineffectiveness taking the apparently unfit striker out of the team, del Bosque looks set to move Pedro in, presumably to the left, and David Villa back to the middle. This will take Spain’s best player - their only consistent goal scoring threat - and move him to the most crowded area of the pitch, away from the only position where he’s had success in this tournament. And if you’re saying that the semifinal is a less-than-optimal time to experiment with this solution, you should have learned spanish and emailed Spain’s federation two days ago. A change like this has been coming.

But this particularly change is not the only option. Other solutions rumored included striker Fernando Llorente and attacking midfielder Cesc Fàbregas, the latter seemingly the popular choice. While Cesc is undoubtedly the most talented player del Bousque has on his bench, his inclusion carries the same issues as Pedro’s. If you swap Cesc in for Torres, Iniesta has to move to a more left-leaning role, and Villa has to come back in to be the penalty-area presence. At that point, it’s debatable whether Fàbregas’s inclusion is better than Pedro’s (depends a lot on whether you think Iniesta is better in the middle or on the left).

Llorente, however, gave del Bosque a chance to address the problems of the existing set-up without undermining the success they’ve had with Villa. He would be a like-for-like swap with Torres, enable Villa to maintain the success he's had cutting-in from the left.  Llorente is also the kind of hard-working, physical presence that can be effective amidst the crowd, an effectiveness we saw from Upson and Nicola Zigic (who set-up the Jovanovic goal). He also offers Spain an option should the need to go around the German middle, being a forward that can be targeted with crosses. For all of David Villa’s virtues, he is none of these things.

There are two pieces of good news for Spain. First, they have the talent to defy any kind of tactical disadvantage. You can play like Portugal, pack all but one or two players deep, and still see a string of intricate passes undo your plan. Second, Spain keeps so much of the ball and limits their opponents opportunities to such an extent that if del Bosque sees his tactics aren’t working, the score may still be 0-0 when he chooses to adjust.

All this tactical talk is well and good, but as even the most tactically astute analysts insist on noting, tactics are just one of many parts of a match, and while they’re often underrated by most covering the game, they are frequently rendered irrelevant. Sometimes, the best players just win, and today, Spain has that advantage. Spain’s players still represent one of the greatest collections of talent we’ve ever seen. Should they choose to assert themselves, there may be little a benevolent del Bosque could do to derail them.