Share All sharing options for: World Cup 2010, Spain Vs. Germany: Can Spain Counter The German Attack? 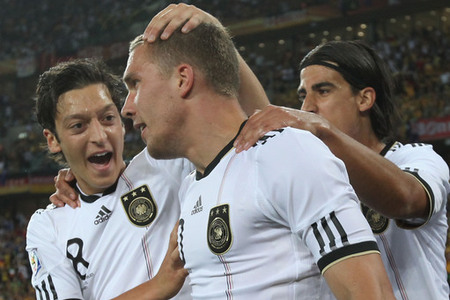 Germany’s 4-2-3-1 formation has been the tournament darling that Chile was supposed to be, but it’s a set-up that they also used in Euro 2008; specifically, in the tournament final against Spain. Looking back at that team, you see that’s where the comparisons end, as a tweaks in the team's personnel have turned the Nationalmannschaft from a prodding squad that spent most of that final tempting yellow cards into a dynamic team capable of scoring within seconds of gaining possession.

That trait will be particularly valuable against Spain, a squad from whom few opponents see little of the ball. Against England and Argentina, Germany showed an ability (if not willingness) to play without the ball, maintaining their composure in defense while waiting for opportunities to counter. That counter attack was responsible for five second half goals against England and Argentina and could also be responsible for getting Germany to the World Cup finals.

Spain’s worst efforts over the last two years have come when they were exposed on the counter attack. Gelson Fernandes’s goal in the first match of this tournament, Clint Dempsey’s goal in the Confederations Cup - it’s a short list, but it’s also two of the three goals scored in Spain’s losses, both coming an classic (if chaotic) counters. While two instances certainly do not a rule make, these observations combined with questions regarding player match-ups makes the question germane: Can Spain stop a German counter attack?

To do so, they will have to contain Mesut Özil, the key addition for Germany between 2008 and now. While Germany was playing 4-2-3-1 in Vienna, they did not have a fast, skilled, dynamic presence in the middle of the three that’s required to effectively play this system. The Dutch have it in Wesley Sneijder and to the extent that del Bosque sometimes plays a 4-2-3-1, the Spanish have it in Xavi Hernández. Now, Germany has it in Özil, and to a greater extent than the Dutch or Spaniards, they’ve had wingers playing they system perfectly.

That changes today with the suspension of Thomas Müller. The German right wing has been amongst Germany’s two or three best players this tournament, but having picked up a yellow card against Argentina, the 20-year-old will miss today’s match with an accumulation suspension. Opposite Lukas Podolski's left wing, Joachim Löw will start Piotr Trochowski, a player being selected as much for his ability to get backward as forward. Against a Spanish team with a tendency to lean left, his inclusion on the right makes more tactical sense than starting Toni Kroos. However, the choice comes with a sacrifice.

With Müller in the team, Germany would have had a commanding advantage over Spain’s deep central midfield: Xabi Alonso and Sergio Busquets, two midfielders masquerading as ball-winners. Where Spain would need a Marcos Senna-type presence to slow down an attack like the Germans, they instead have question marks. Whether the Germans can exploit those question marks without Müller remains to be seen. Özil, while a revelation in this tournament, has shown signs of wearing down, while Podolski has been good but not Müller’s equal. The versatility Müller offers - being able to play  more centrally or along the line and allow Miroslav Klose to go wide - will inhibit Löw’s ability to target specific weaknesses. Whether Trochowski can replace all of those traits is doubtful.

Despite this diminished capacity, the Germans can still exploit Alonso and Busquets. Özil will be able to turn into a counter without having to worry about a true destoyer, allowing Germany to build the same momentum into attack that we saw tear-open England and Argentina. While they won’t have their full array of attacking options available to exploit Spain, they will have two, proven, major tournament goal scorers: Klose and Podolski.

Spain’s best defense may end up being a good offense. The Germans can’t score if you don’t give them the ball.