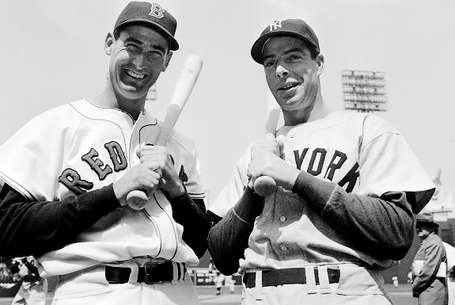 The 1941 All-Star Game was notable for bringing the Yankees' Joe DiMaggio and the Red Sox' Ted Williams together on the same team. The two Hall of Fame outfielders were rather friendly off the field (Joe's brother Dom played for the Red Sox), though on it they were fierce rivals. In 1941, Williams and DiMaggio had two of the greatest seasons of all time, with Williams batting over .400 and DiMaggio breaking the consecutive games hit record.

In this game, the two sluggers played in left and center field while also hitting back-to-back in the batting order. DiMaggio came in with his hit streak at 48 games; he would collect a base hit in this game as well, although it wasn't added to his total. In the bottom of the ninth, DiMaggio came to the plate with Williams waiting on-deck. The National League had Claude Passeau of the Cubs on the mound -- the NL was leading 5-3 with the bases loaded and one out.

DiMaggio grounded it to the shortstop, setting up what looked to be a game-ending double play. The NL collected the force-out at second, but Billy Herman's throw pulled the first baseman off the bag. With DiMaggio on base thanks to an error, Williams stepped to the plate with two outs and two on. Having struck out against him in the previous inning, Williams delivered in the clutch with a towering, three-run homer to the upper deck of Briggs Stadium (AKA Tiger Stadium).

Williams trotted home, even displaying a rare show of emotion, and was congratulated by DiMaggio. His three-run home run was one of the most memorable in All-Star Game history, and the one Williams described as the best of his career.