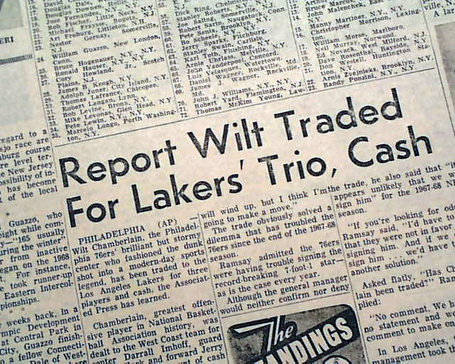 (Photo of an AP article in the Fitchburg Sentinel, 1968)

At the Baker Bowl in Philadelphia, Pennsylvania, Pirates shortstop Honus Wagner doubles off Erskin Mayer to earn the 3,000th hit of his career -- joining Cap Anson as the only men to do so. Wagner was one of the greatest players of the dead-ball era, and even bested Ty Cobb when the two squared off in the 1909 World Series. Wagner finished with 3,415 hits and a .327 batting average, and was among the original inductees into the MLB Hall of Fame.

Wilt Chamberlain, who attained immortality by scoring 100 points in a single game, is traded from the Philadelphia 76ers to the Los Angeles Lakers. Chamberlain spent the first five-and-a-half years of his career with the Warriors and made the transition when they moved from Philadelphia to San Francisco. The Syracuse Nationals then moved to Phili, becoming the 76ers and filling the city's NBA void -- Chamberlain was then traded to the 76ers, where he stayed for four seasons.

The Lakers only had to give up three players to satisfy the Sixers, who just wanted Wilt off their team. Although he was only 32 years old and had just won his third straight MVP award, Chamberlain was asking for a pay raise that they weren't willing to give him. The three inexpensive players the Sixers got in return were Jerry Chambers, Archie Clark, and Darrall Imhoff -- the very man who guarded Chamberlain when he scored those 100 points.

There was no contest who won the trade. Chamberlain played four seasons in Los Angeles, helping the Lakers to the Finals three times and winning a championship in 1972. None of the players Philadelphia received made any impact at all, and the team spiraled downward in the following years. The lowpoint came in 1973, when the Sixers went an abysmal 9-73, the worst record in NBA history. 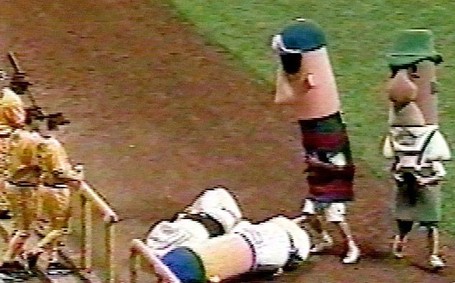 (The aftermath of the hit. TV screen capture.)

In the middle of the sixth inning, a Sausage Race would take place at every Milwaukee Brewers home game. People dressed up as a Polish sausage, an Italian sausage, a hot dog, and a bratwurst would race along the third base line, a tradition inspired by other ballpark JumboTron races. But on this day in 2003, something happened during the Sausage Race that wound up on the evening news.

Pirates first baseman Randall Simon was standing next to the dugout railing when the racers came by. Simon then used the bat in his hand to tap the back of the Italian sausage, causing 19 year-old Many Block to fall to the ground. The fall impeded the path of the Hot Dog, which also tripped, allowing the Bratwurst to claim an uninhibited victory. The Polish came over helped up the Italian, and every wiener finished the race.

After the game, Simon was arrested and forced to pay a $432 fine, then was suspended for three games. By knocking down two women who were 19 and 21 years old, many were willing to run Simon out of town. ''A lot of times you have fun with the mascots,'' explained Simon, who said he didn't mean any harm. ''They were just running by us. I just wanted to tap the mascot at that time, right at the end, so they can keep going and finish up the race. I didn't have no plans to hurt her, neither of the girls. First of all, because I'm not that type of person.''

Fortunately for Simon, the person he hit with the bat didn't feign outrage or injury, or try to exploit him for a million dollars. All Block asked for was the aforementioned bat to be autographed and given to her.

"It just seems ridiculous," she told a local station. "It's like a big sausage getting hit by a bat causes all this controversy. It just seems kind of funny to me. It wasn't that big of a blow. I think just because I'm so small and it's such a big costume that I tumbled." 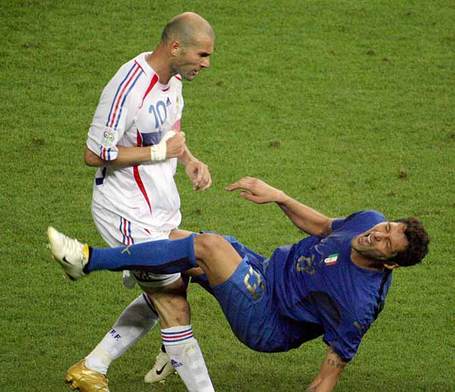 In front of a global TV audience of a billion people, Italy beats France 5-3 on penalty kicks to win the 2006 FIFA World Cup. But the big story (at least in America) was what happened 110 minutes into the game, when Zinedine Zidane of France headbutted Marco Materazzi of Italy. A red card was called on the French superstar, ejecting him from what was the final game of his career.

Zidane was known as one of the best soccer players on the planet, and he scored France's only goal in regulation, yet he ended up walking off the field in disgrace. He was later voted the player of the tournament.

Afterward, everyone wanted to know what had provoked Zidane to eject himself from the biggest sporting event of the year. Zinedine claimed that Materazzi insulted his mother and sister, as well as calling him a "dirty terrorist." Materazzi admitted that he provoked him and even insulted his sister, but denied saying anything about his mother or that he called him a terrorist. "I exclude any insults to (his) mother," he said. "I lost my own mother when I was 15 years old. I would never insult anyone by having a go at their mother."

Various networks hired lip readers to determine what Materazzi had said. They all came to different conclusions, although there appeared to be a consensus that Marco did repeatedly insult Zidane before the headbutt occurred.

Also on this day:

1957: The American League defeats the National League, 6-5, in the 24th edition of the MLB All-Star Game. Cincinnati Reds fans had stuffed the ballots, making seven of the Reds' eight position players All-Stars.