Lessons From South Africa: A Soccer Novice Reports Back From World Cup 2010

Share All sharing options for: Lessons From South Africa: A Soccer Novice Reports Back From World Cup 2010

I've had the privilege of attending numerous big-time sporting events and visiting over 30 countries in my lifetime.  But nothing compares to my first World Cup and my first visit to Africa.

My trip began in mid-June in Cape Town, South Africa, where the Dutch first started settling in Southern Africa en masse over 300 years ago and, like much of Africa, brought modernization to the continent along with decades of oppression and division that has led to many of Africa's problems to this day.  The World Cup, of course, masks many of these issues and like its only competitor on the international sports stage - the Olympics - brings a sense of international unity to countries that may be adversaries otherwise.

Not being a soccer fan myself, I had the typical preconceived notions of what to expect from soccer's preeminent showcase.  I envisioned gangs of soccer hooligans rampaging through the streets of Cape Town, wreaking havoc on the local population as well as those in attendance at the games.  I expected to see flaming bags of garbage flying onto the field and brawls breaking out in the stands.

Instead, I found World Cup fans to be the most civil and gentleman-like of any sports fans I've ever encountered.  Sure, they rooted boisterously for their respective teams and countries and wore costumes that could only be rivaled at Comic-Con.  But remarkably, no one openly rooted against their opponents or for their opposing countries to fail (it should be noted that I wasn't at the Portugal vs. Spain game, I assume the crowd was a bit feisty towards each other there).  For example, while attending England vs. Algeria during Group competition, a number of English fans I spoke with commended me on the US team's outing against Slovenia and took it in good humor when I chided that Robert Green was my favorite soccer player. 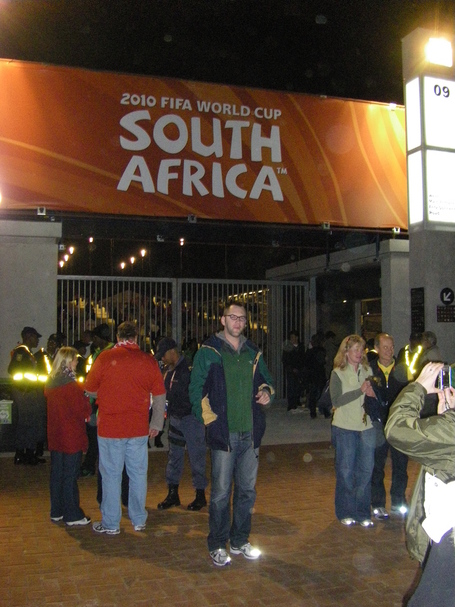 In particular, I was startled at the conclusion of the England vs. Algeria game by how ecstatic the Algerians were at the game's outcome.  In one of the most boring athletic events I've ever attended in person, the game concluded with a 0-0 (nil-nil) tie, with Algeria playing much of the second half to secure the tie (more on that shortly).  But in spite of tying, you'd think the Algerians had just won the Super Bowl based on their celebratory nature after the game was over.  For them, merely tying England was the greatest of accomplishments.  And while a tie may not be good enough for us, seeing the joy on their faces brought a wide smile to my own.

I next attended North Korea vs. Portugal, a bizarre game by any measure.  First off, the crowd was littered with Portuguese fans compared to only a handful of North Korean fans (rumored to be from China, more bizarrely).  After playing a gutty first half and keeping the score to just 1-0, the North Koreans couldn't handle the Portuguese in the second half and ended up losing 7-0, which is like losing by 100 points in an NBA game.  Having fought to stay awake through England vs. Algeria's 0-0 snoozer, I appreciated the goal onslaught but felt awful for the North Korean players, a classy bunch playing for an anything-but-classy regime.  At the game's conclusion, the North Koreans were cheered warmly by the crowd and by their fellow competitors on the field.  I just hoped - for their sake - that Kim Jong Il wasn't watching.

For my final World Cup game I found myself sitting in a sea of orange when I watched the Netherlands take on Cameroon, a game that meant little to either team but was fun nonetheless.  Among the fan bases I got to see up-close, the Netherlands fans took the cake for most creative costuming and in many ways it reminded me of a Denver Broncos game, with fans (male and female) wearing puffy orange legwarmers, orange cowboy hats, riding orange stuffed animals, painting their faces with elaborate orange-infused designs and so on.  But while they may have looked obnoxious, their behavior was anything but.  When Cameroon made a few good plays during the game, the Dutch would commend them with a round of applause.

Upon reflection, I think the World Cup brings out a classier fan base because the cost of being there is so high.  Especially when it's in a country like South Africa requiring ample travel time and expense.  And as far as the raging sound of the oft-condemned vuvuzelas are concerned, I miss their sound already.  Those who have slammed them (like Rick Reilly ignorantly did in a recent ESPN.com column) either didn't attend a single game in person or, if they did, miss the point.  Distinct to the culture of South Africa, the vuvuzelas were embraced by fans from every country, with the Dutch tooting on orange ones, the English with red and white ones, the Algerians with green ones, etc.  I even brought four back for myself with the flags of all the World Cup participants painted on the side.  Having sat through three World Cup games, the never-ending noise of the vuvuzelas not only didn't bother me, but gave the games a special feel when fans across the stadium synced their "vuvuzela-ing" to coincide with certain moments of the game.  Bottom line is the vuvuzelas gave the 2010 World Cup a little extra character, and I don't see why that's a bad thing.

After spending weeks following soccer closer than I ever have before, I can't say I'm a fully converted soccer fan but certainly have a renewed appreciation for the sport and it's loyal followers.  Maybe I'm just a scoring junkie, but seeing teams play for a tie doesn't do it for me.  I wish FIFA would change the Group round rules to include penalty kicks, thereby forcing teams to play for the win.  I have to believe that it would make this exciting spectacle even more so.

As far as South Africa itself is concerned, I was only in Cape Town and its surrounding areas but it seems to me that 16 years after electing Nelson Mandela to the presidency the country offers great promise. South Africa still has a number of problems to overcome left over from the apartheid era and its aftermath, but its leadership deserves credit for preventing it from becoming another Zimbabwe or devolving into civil war (as almost happened preceding those elections 16 years ago).  And even though Cape Town was undoubtedly "dressed up" for the Cup, it was one of the most beautiful cities I've ever visited and I'll be sure to return.

After spending a week neck deep in soccer in South Africa, I moved on with my group to Kenya and then capped off the trip in Rwanda.  Kenya - two years removed from political violence that threatened to divide the country - appears to be on the right path.  Nairobi - the country's capital - is bursting with energy, evident by English-speaking young people conducting business (and pleasure) on their cell phones on every street corner.  The new government is delivering on (many of the) promises made to the people, all 42 tribes worth of them, and you just get the feeling being there that its future is bright.

My African journey concluded in Rwanda.  After gorilla-trekking for two days our trip ended at the Kigali Genocide Memorial Centre which commemorates and educates visitors about the 1994 Rwandan genocide - a mass killing that cost over 1,000,000 people their lives in just 90 days while the international community sat on the sidelines - and the other notable genocides from the 20th century, including the Holocaust and the genocides that occurred to the people of Armenia, Bosnia, Cambodia, Namibia and elsewhere around the world.  Being at the memorial, just weeks removed from seeing the world united around soccer, was a powerfully somber reminder of how brutal, violent and barbaric we can still be to each other.  But in spite of the unspeakable brutality that happened in Rwanda, just 16 years removed from genocide the economy is growing, the people are healthy and optimistic about their future and, like Kenya, everyone is yakking away on their cell phones.

Like Kenya and South Africa, Rwanda has great promise and potential - as I suspect much of Africa does from Algeria down to South Africa, and from Liberia across to Kenya.  Should you get the opportunity to visit any country in Africa, I wholeheartedly say do so.  It can be expensive and cumbersome time-wise to get there, but its well worth the journey.

The great people of these countries deserve our attention, support and investment dollars, and it shouldn't take a big time sporting event to get more Westerners to visit.  I'm most grateful and thankful that the World Cup brought me to Africa for the first time, but I won't need a big sporting event to bring me back.

Lessons From South Africa: A Soccer Novice Reports Back From World Cup 2010