Share All sharing options for: Kevin Durant's Not Good Enough For President Obama?

Listen, it's hard to be the President of the United States. There are 1,000 different decisions that have to get made every day, and one misstep brings the whole world to your front door, asking for an explanation.

But how could Obama snub Kevin Durant??? While the President was holding court at the coolest pickup game ever—with pretty much every famous basketball player currently in the NBA—Kevin Durant was a few miles away, just hanging out in Washington D.C., his hometown. But the invitation never came, and poor Kevin was left all alone with a towel over his head. 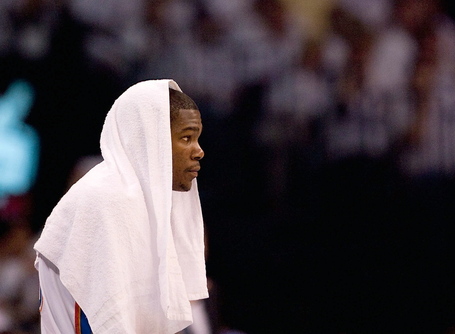 Sure, he took the snub gracefully, but then, that's what makes him Kevin Durant. Fanhouse reports:

"I didn't even know it was going on until somebody told me on Twitter. I would have loved to be there. I'm from DC, and I never had a chance to go the White House. It would have been cool. But there's always next year. Hopefully, they'll do it again and I'll be invited.

"I was born and raised (in the Washington area). It would have been cool to go up there and play on the court and just to meet the president since I've been living there my whole life and never got a chance to do it ... Especially him being the first African-American president (and) being a big basketball fan, it'd have been cool for me to see and a great experience.''

It's too bad, but you know what? Kevin's young. And Barack will learn in due time, you can't have a celebration of basketball in Washington D.C. and not invite the district's favorite son. But we'll give him the benefit of the doubt here. Maybe he was too busy with "other stuff" to remember Kevin Durant led the league in scoring this past year.

Or maybe Evil LeBron James is trying to blackball our Pure and Innocent Hero, Kevin Durant, the same way Jordan blackballed Isiah. This is just a theory, mind you. But if that's going to become the defining rivalry of the next decade, well, we gotta start somewhere.

Speaking of actual basketball... Kevin closed by saying, "Somebody told me if we win the championship, I'll go see the president." Indeed. Kevin's too polite to break it down this way, so I'll help him out.

"MANNN, F%$K A PICKUP GAME. I'LL SEE BARACK WHEN WE WIN THE TITLE." 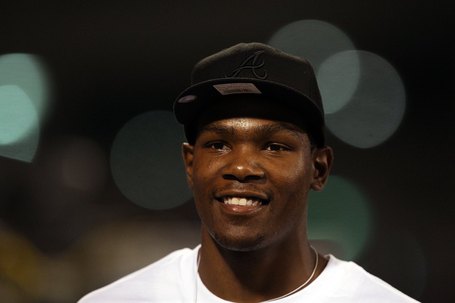