The Dream Team Enters The Basketball Hall Of Fame: Can The Lakers, Bulls, And Celtics Come Too?

The 1960 and 1992 Olympic Teams are being inducted into the Basketball Hall of Fame this weekend. But if they're being honored, shouldn't the 10 best basketball teams of all-time go in as well? Yes. Yes they should.

Share All sharing options for: The Dream Team Enters The Basketball Hall Of Fame: Can The Lakers, Bulls, And Celtics Come Too?

The Basketball Hall of Fame is a weird place. For one thing, it's in Springfield, Massachusetts. For another, it's an all-encompassing basketball museum, meaning you've got some of the most famous NBA players in history, and then a bunch of people you've probably never heard of.

Maciel "Ubiratan" Pereira, anyone? He's getting inducted this year.

But as weird as that sounds, that's the way it should be. The Basketball Hall of Fame should be a monument to the sport, not a league, and basketball history should reflect that a whole lot of people have influenced David Stern's league without ever actually playing in it. Someone like "Ubiratan" ("the King") paved the way for a whole generation of future NBA players from Brazil, and that's something that changed the sport. We should recognize that.

But the fact is, if we're going to recognize everyone--and induct a certain amount of people every year--some years will be more exciting than others. And that's how last year's class, "David Robinson, John Stockton, Jerry Sloan, and Michael Jordan" gives way to... "Eh, some other guys that need to be mentioned." What are we supposed to say?

But even with Hurley coming in, there's not a lot of sex appeal this year. Not a lot of material for people to wax poetic over. Most years people ask, "Is it getting a little dusty in this room?" This year? No, it is not.

And unless Michael Jordan hijacks Pippen's induction speech (current Vegas odds: 15/2), this isn't a year that'll go down in history. But before we dismiss it altogether...

This is a good time to talk about something missing from the Hall of Fame. Because in addition to the relatively forgettable bunch of inductees above, the Hall of Fame will honor the 1960 and 1992 Olympic Teams. And that's something they should do more often.

Think about this: We're talking about a monument to the game of basketball--and inducting people like Cynthia Cooper and Dennis Johnson--that doesn't really recognize any of the most memorable teams in the history of the game. The '80s Celtics, the '90s Bulls, the '70s Knicks, and on and on. We could even induct the Cooper's old Houston Comets teams, if David Stern insists.

Point is, in sports, there are certain times when the whole exceeds the sum of all the parts. When a handful of stars coalesce to form a group that you spend the next forty years talking about. If we're memorializing arcane names from Brazilian basketball and WNBA stars (and we should), then there's no reason the Hall can't be expanded to include a "Greatest Teams" wing.

Is this all an elaborate ploy to get Dennis Rodman into Springfield? Maybe. 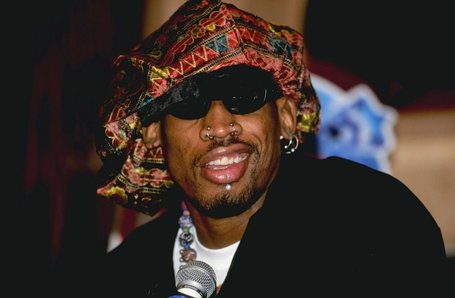 But take the 1960 Olympic Team that'll be honored this weekend. I hadn't heard of them until this past weekend, when Oscar Robertson's New York Times essay educated me. As the Big O tells it, that team "had speed, quickness and stamina, played stifling defense, and rebounded at both ends of the court. We averaged 102 points and held our opponents to fewer than 60."

The Gold Medal winners included Jerry West, Robertson, Jerry Lucas, and Walt Bellamy, all of whom were later inducted to the Hall of Fame as individuals. But isn't cooler for them to also be remembered for their contributions to the 1960 bunch? You can tell from Robertson's tone in the TImes, being part of that team is something he'll remember for the rest of his life. "Everyone played his role," he writes.

To have everyone forsake their self-interest like that... It's not just rare in sports, it's rare in life. But sometimes, things just happen perfectly, and everyone gets elevated to a different, special place. It only lasts a few years, or with Olympic teams, a few months. But it's worth remembering, because it's usually impossible to recreate.

For instance, if you were to create a version of that 1960 team this summer, here's what you'd have, assuming everyone stayed in school for the full four years, as they did in 1960:

That's best case scenario, and it still doesn't hold a candle to the thought of an Oscar-West backcourt, let alone Walt Bellamy and Jerry Lucas thrown in the mix. Like I said, when greatness happens... It's really rare. Which is why we need to celebrate it more often.

Basketball fans can never hear or learn enough about the Dream Teams of 1960 and 1992, but the same can be said for the early-years Lakers and Celtics teams, the '70s Knicks, etc. The concept behind inducting the US Olympic teams is that they helped popularize basketball and turn it into a global sport. But can't you say the same thing about every truly great team from the past fifty years?

And since I'm talking mostly in the abstract here, let me go ahead and offer a handful of suggestions to the Hall of Fame for future induction. Wouldn't it be cool to have a wing of the Hall of Fame dedicated to the most badass teams of all time? Admit it, these guys would keep you interested:

1. Boston Celtics, 1959-1966: THEY WON EIGHT STRAIGHT TITLES. Aside from the winning, though, Red Auerbach went a long way toward promoting the complete integration of the sport on the biggest stage possible (didn't hurt that they won, too), and helped establish a benchmark for success that every franchise has aspired to ever since. (Note: these guys played thirty years before I was born, so you're not getting much more than that. But... THEY WON EIGHT STRAIGHT TITLES.)

2. New York Knicks, 1970-1973: As opposed to the Celtics, they only won two titles during this span. But the combination of Willis Reed's infamous return in Game 7 of the 1970 Finals (which New York won) and the whole aura surrounding Walt Frazier, Dave Debusschere, Bill Bradley, Willis Reed... They were rock stars, and they were the answer to the Celtics dynasty, that helped usher in a new era. (Put it this way: the Knicks have been living off the mystique of this team for almost 40 years now).

4. Philadelphia 76ers, 1980-1983: Personal favorite. They never reached their full potential, and Moses Malone and Dr. J spent the peak of their careers elsewhere. But... The 76ers were just so awesome back then, and the 1982-83 group was as good as any team in NBA history. Fo' fo' fo', anyone? Moses Malone, Maurice Cheeks, Andrew Toney, and of course, Dr. J. They're overshadowed by the Lakers and Celtics, but that's exactly why they need to be in the Hall. For posterity's sake, Fo' Fo' Fo' must be memorialized.

5. L.A. Lakers and Boston Celtics, 1980-1988: A joint induction. They made the NBA what it is today, and they did it playing arguably the most memorable basketball in history. With great teams, we're talking about groups than pushed the individuals to another level. And in this case, both teams did it at the same time, and taught an entire generation that when it's played well, basketball is nothing less than the coolest game on the planet.

6. Detroit Pistons, 1988-1990: Probably would have won three straight titles if not for Isiah Thomas' sprained ankle against the Lakers in 1987. And you can't have a conversation about the most memorable teams in NBA history without mentioning the Bad Boys Pistons, Isiah's brilliance as a point guard, and Bill Lambier's frumpy ebullience. (Plus: Our first chance at a Rodman sighting!) 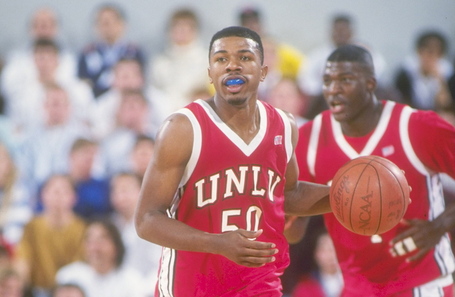 7. UNLV, 1989-1991: Lost only two games in two years--once to New Mexico State, and once to Duke, in the '91 National Championship game. But despite the slip-up against Duke, the Runnin' Rebels remain arguably the most terrifying team in recent college hoops history, and easily the most routinely dominant group since Indiana went undefeated in 1976. The 1990 rout of Duke to win the national title (103-73) remains one of the more memorable blowouts in basketball history, and the whole team, from Larry Johnson up front to Greg Anthony playing the role of little general... It was like a force of nature.

8. Chicago Bulls 1991-1998: Probably the most self-explanatory choice on the list, and it gives Michael Jordan another chance to delight us with an off-the-cuff rant against a bunch of people you've never heard of. (Michael and Jerry Krause on the same stage? Is it too late to induct the Bulls this year?)

9. University of Michigan, 1991-1993: What N.W.A. was to pop music, the Fab Five was to college basketball. And like N.W.A., we remember them less for anything they did (no titles for Michigan), than what they meant. And again, if we're talking about teams that changed the face of basketball, the Fab Five deserves as much as credit as the '92 Dream Team or anyone else. For better or worse. (Plus: Can you imagine the NCAA's reaction when they found out the 91-93 Michigan teams--which never existed, according to record books--are Hall of Fame bound). 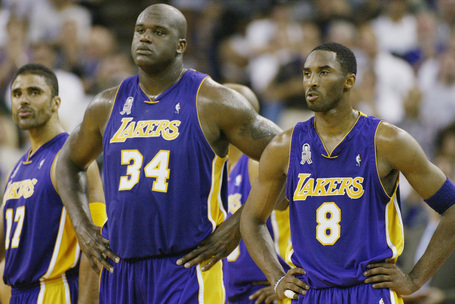 10. Los Angeles Lakers, 2000-2002: Three straight titles, Shaq and Kobe, etc. It happened so recently that we know most of the backstory, but people forget just how dominant Shaq was at this point in his career, when 40 and 20 was a realistic possibility every night. And putting the drama aside, with Kobe riding shotgun and available to take big shots in crunch time, the Lakers were just about unstoppable.

...And that's a solid place to stop. Do the '04 Pistons make it? The 2000s Spurs are a shoo-in, but considering they're still playing, it's too early to talk about including them. Which other college teams would make it? And what about the Houston Rockets from the mid-90s? On the one hand, they won back-to-back titles, but on the other, they did it with Jordan retired. Were they great, or just good enough to win in lean years?

In any case, it's a fun debate. And imagine walking through a room full of highlights and memorabilia from these old teams. It'd be the Hall of Fame experience on steroids. You can have a million great players, but only a fraction of those players will ever play for one those teams.

Individuals can do beautiful things on the court, but nothing's more indelible--and elusive--than the team that makes excellence look routine. Where they're so good and so perfect, every game they play turns into a celebration of basketball. Isn't that what the Hall of Fame is all about? 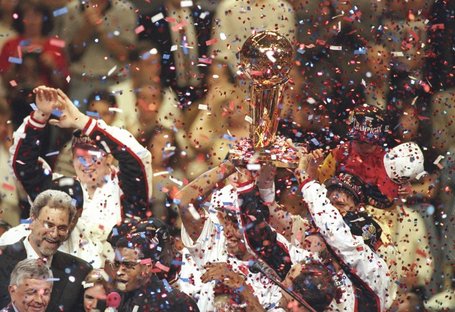