With Chipper Jones Out For The Season, Braves Fans Should Get To Know Freddie Freeman

Share All sharing options for: With Chipper Jones Out For The Season, Braves Fans Should Get To Know Freddie Freeman

With Atlanta Braves star Chipper Jones out for the season and Troy Glaus slumping of late, we turned to John Sickels of SB Nation's Minor League Ball blog to take a hard look at prospect Freddie Freeman, an infielder the Braves may promote to supplement the roster down the stretch. 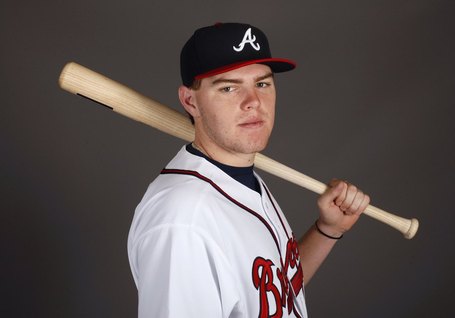 He isn't a huge walk machine, but his strikeout rate is reasonably low for a young power hitter, a good marker for his future, and he's still only 20 years old. Someone his age who posts an .873 OPS in Triple-A has a terrific future. He has the "sweet swing" that scouts like to see, and hasn't shown much vulnerability to either breaking balls or fastballs. He's also a very good defensive first baseman.

As with any young player, there could be an adjustment period when Freeman reaches the majors, and instant stardom should not be expected. Nevertheless, Freeman is one of the very best first base prospects in baseball, and likely to be a core player for the Braves along with Jason Heyward for years to come.