Savannah Sand Gnats Are On Fire

Share All sharing options for: Savannah Sand Gnats Are On Fire

Out of the box marked "Absolutely no way it can possibly go horribly wrong," comes this promotion from the Savannah Sand Gnats of the South Atlantic League. Tomorrow night's game against the Kannapolis Intimidators, Ted Batchelor will run the bases. Nothing too remarkable about that. Except that Batchelor will be in flames when he does so, and "one lucky fan will light Batchelor on fire."

Turns out that Batchelor is an old-hand at this, owning the Guinness World Record for the "Longest full-body burn without supplied oxygen" - 2 minutes, 57 seconds, in case you were wondering - "medium rare," to the rest of us. On that basis, even if executed at the speed of a David Ortiz home-run trot, the stunt should hopefully not pose any major problems to Batchelor's well-being. 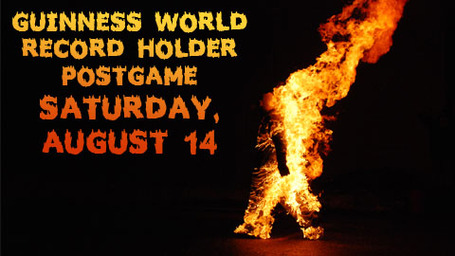 The press-release also states that Batchelor and his crew own the record for "most people on fire simultaneously", though the number quoted, 17, seems a little loq - I'd have said that mark still belongs to the crew of the Hindenburg [What? Too soon?] But in case that's not enough for you, the Mets Class-A affiliate are simultaneously holding "Marine Corps Appreciation Night: and  "St. Joseph's / Candler Bluffton / Beaufort Community Night."

One does feel they are missing some opportunities here: they could have invited the Canadian groundskeeper who set his baseball field on fire to dry it out, or at least organized some kind of tie-in with a marshmallow company. Still, Sand Gnats President John Katz said,"Hopefully, when he slides into home...one of the umpires will officially call him 'out'". Ho-ho-ho. Insert "blazing fastball" joke here...