How Well Have Baseball Teams Used Their Payrolls This Season?

Share All sharing options for: How Well Have Baseball Teams Used Their Payrolls This Season?

We expected the Tampa Bay Rays, whose payroll is dwarfed by the likes of the Yankees and Red Sox in the A.L. East, to do well this year, but unlike the past couple of seasons, their success is no longer an anomaly. Look at the payroll numbers in 2010, and consider these two items:

Take a look at the chart below to see how your team is looking this year in terms of monetary efficiency: 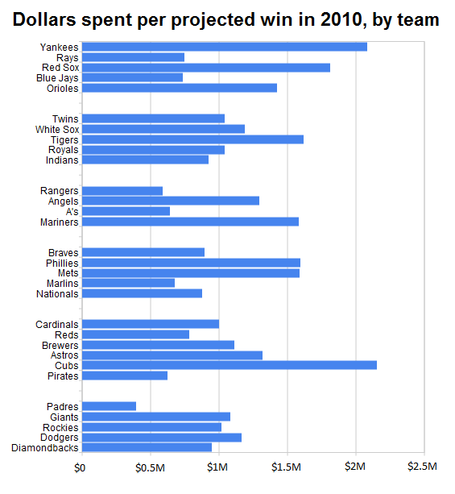 For "projected wins," I used the numbers from Cool Standings, which takes into account the team's performance this season, its strength of schedule, its home/away games, etc., to estimate the number of wins it will finish with at the end of the season. For example, the Yankees are projected to finish with 99 wins. I then divided the team's 2010 payroll by this number.

As a result, the Yankees and Cubs are projected to spend over $2 million for each win this season. Meanwhile, the upstart Padres are below $500,000 in this respect.

With 45 to 50 games left for each team to play this season, a lot can change, but this serves as an opportunity to appreciate what teams like the Padres, Rangers, and Rays have been able to do this season. And, if context isn't important to you, you can note that the Yankees have paid over three times more per win than the Pirates have. Suckers!