When can a proud affection for the Florida Gators get you fired?* When you're an Arkansas radio personality sporting a UF hat in a Razorbacks press conference, apparently. Renee Gork, a Florida grad who'd been on her beat less than a year, was coldly chided by Petrino when he spotted her cap in a Saturday media session (video available here). The bizarro-world kindergarten soccer team that is the Arkansas fan base took it from there, and with a flurry of a thousand tiny kicks in tightly bunched formation, Gork was brought low: 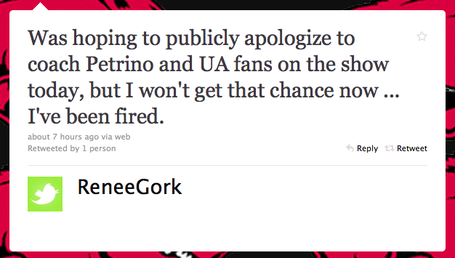 Gork went on to deliver her platitudes to an unforgiving internet, writing, "The apology letter was addressed to coach Petrino. I am truly sorry for disrespecting him and his team." And this is where her brief tenure on the job is thrown into stark relief, and that's what makes this all so funny.

Gork's apology is ill-directed. Bobby Petrino doesn't care about Arkansas. Bobby Petrino cares very much that he, personally, should have beaten Urban Meyer last September, and apparently did not care to be reminded of such. Any display that appears to show loyalty to Arkansas on his part should immediately be reexamined for ulterior motives. (Hush, angry Arkansas types. You knew what you were getting when you hired him. Enjoy him while he lasts, and shed no tears when he hitches out of town in the dead of night. He's a surly Mary Poppins unburdened with a human soul, and he shall stay until the wind changes.)

*Unless you're these guys, who, as of press time, still have jobs as far as we know.