Share All sharing options for: Ohio State's 'Race To Glendale' Needs Its Own Travel Channel Special

This is a week late, but we do not care, because OH MY GOD LOOK AT THIS THING, an "artist's rendering" of Ohio State's 2010 national title campaign: 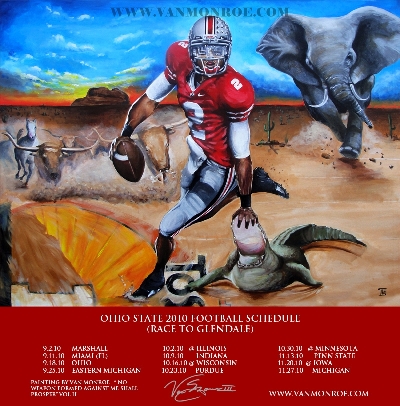 The artist is one Van Monroe, whom we hope finds continued success in his field, because we want one of these to come out every year even if the Buckeyes' ultimate endgame is the Little Caesars Bowl. Pictured in snappish pursuit of Terrelle Pryor are the marauding forces of Alabama, Texas, and Florida, presumptive deterrents to the Buckeyes' quest for the crystal football, because depicting shots of Ohio State's actual opponents Marshall, Minnesota, and Eastern Michigan just wouldn't have quite the same punch. (You ever try to make a gopher look menacing?)