Share All sharing options for: A Deranged Shirtless Man Wants To Sing To You About The Cowboys 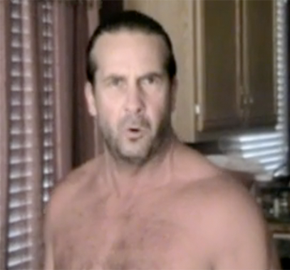 If there's one resource that is never on the decline, it's bizarre fan videos on the Internet. I believe Versus once had a TV show that made use of this phenomenon for content. Naturally the producers had to actually filter it so only the coherent and not unsettling would ever get air time.

Matthias here would not be passing through that checkpoint, most likely. In a video the man submitted to the Cowboys blog Blue Star, a Southern California-based backer of America's Team saw fit to introduce an incredibly intense new fight song for his favorite team. Moreover, he felt it needed to be done while shirtless in his kitchen. Forget your sartorial needs, he will clothe himself in fury.

What might be most disturbing about this is that he actually got another person to help him film it. It's one thing to act crazy for an unseen online audience, but when someone else is actually in the room? Woof.