Can Tiger Woods Ever Win Again?

For years, Tiger Woods was on top of the world like no golfer we'd ever seen before. Now that he's crashed back to earth, it's fair to wonder. Can he get back up again?

Share All sharing options for: Can Tiger Woods Ever Win Again?

In the past nine months, Tiger Woods has fallen faster and harder than just about any athlete in history. We all know this by now, but it has to be underscored—we've never really seen something like this before.

Since his arrival on the PGA Tour, the questions surrounding Tiger have evolved.

From "Can this amateur beat the pros?" to "Can he prove it wasn't a fluke?"

Then, from "Can he keep beating people like this?" to "Can anyone beat him?"

"How much will he beat Jack Nickalus by?"

It all grew more surreal with each passing year. And then this year happened. 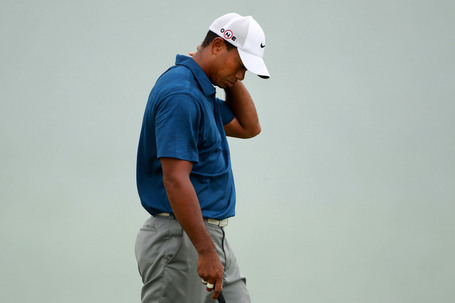 In April it was, "Can he still beat people?" Now: "Will he ever beat anyone again?"

Even at the highest levels, golf renders everyone human. You can be the greatest golfer on earth, or even in the game's history, but there's just no getting around it: Some days, the golf course wins. It's like the ocean. Some days the current is stronger than others, but it never stops, and eventually, the ocean always finds a way to remind us we're inferior. So does golf, even among the very best.

But Tiger cast doubt on all of that. He made golf's ocean seem like his own, personal lap pool, and for a little while there, you could say that Tiger was playing a different game. Competing against ghosts, himself, and the soul of the sport.

It sounds like heresy to wax poetic over this now, after the revelations that Tiger was really quite a disastrous human being during much of this stretch. But still. Tiger Woods was the only golfer I've ever seen that made golf look something less than impossible, and golfing perfection something close to attainable.

What we've seen from Tiger has been nothing less than very best and worst of what humans can do in life. He mastered his craft to a level that almost none of us can ever know firsthand. He was so good, we called him inhuman.

And now, as his future twists in the wind, he's been so distinctly human that more and more, we're beginning to wonder whether he'll ever be good again. Erratic, vulnerable, apathetic, and often irrelevant—all of a sudden, he's just like the rest of us.

Does that mean he's finished? Over at New York Magazine this week, Drew Magary wrote a pretty compelling essay on the question. His answer? Yeah, it does:

Perhaps Woods would have been able to withstand this horrible year if there were an actual person behind all the ads. But there isn't. Athletes like Woods and LeBron James were raised to cultivate a brand identity, and when you're raised that way, your brand identity becomes your actual identity. There's no separating the two. Woods spent his entire life cultivating his image, and when that image was destroyed, he was destroyed. There was no actual person to fall back on. No separation of church and state.

When Tiger Woods had the image of being an indestructible force of nature, he was precisely that. He needed that reputation. It fed him. And now that it's gone, he has nowhere else to draw strength from. Tiger Woods built his perfection upon the illusion of it. And that's why, as far as major championships are concerned, Tiger Woods's career is now over.

It's a fair interpretation from someone I respect a whole lot. For my money, Drew's the best sportswriter online, comingling the perfect amount of insight and entertainment, and tearing through the coporate-sponsored veneer of 21st Century sports to give us an unsentimental look at what this stuff really means.

But he's wrong. It's popular to be unsentimental about Woods these days, because frankly, he's left us very little option. We've learned more about Tiger Woods in the past nine months than we had in the previous nine years, and none of it's been flattering. Even when he's talked about his Buddhist faith, it's been as an explanation for infidelity.

So I understand where the critics are coming from.

Woods was raised on a golf course, sheened for presentation by billion dollar corporations, and (clearly) never  developed into anything resembling a decent human being. His world has been insulated from the start—first by his father's design, and later, by Nike's.

But what struck a chord with me is the idea that this is somehow unique to Tiger. I mean, for all the cynicism out there about Tiger and what created this mess, maybe the most unsentimental perspective of all is also the most forgiving. Tiger's just another human.

And as humans, we're all insulated from various realities at one point or another. As life unfolds, we come understand it differently. The attitudes that govern our actions at 16 are very different from those which run our lives at 60. But that only happens after we experience pain, learn our limitations, confront weakness, and adjust. When something pops our little bubble and smacks us in the face. The difference with Tiger is his bubble was stronger than ours, and went unchallenged for years.

He's been the best practically since birth, and because of that, he's never had to confront the demons and doubts that plague normal people. He's rich beyond anyone's wildest dreams, he's won at everything, he's had a beautiful wife, and for the last 15 years or so, he's been pampered to death by a media grooming him as some sort of athletic deity.

Now that his reputation's been shattered, a number of people wonder whether he has the tools to weather the adversity. And right now, he doesn't. It's completely accurate to say that Tiger has never to "play from behind" in life or in golf. But it's completely ludicrous to say that he can't learn.

How else do we do evolve? Humans only change through pain, and the process isn't pretty.

We all hit rock bottom sometimes. Tiger's behavior for the past 15 years was more reviling than most, but that's not a reason to think he can't or won't recover. That's just what it took to pop what seemed to be an impenetrable bubble insulating him from the character judgments of the real world, and all the pain that comes with it.

Now we're watching him grapple with the wreckage he's created for himself, trying to cobble together something resembling a coherent round of golf, and it's seen mixed results. It's been six months.

When someone as famous and successful as Tiger Woods gets broken down, it's easy for cynics to call his downfall inevitable and permanent, but also naive. Fact is, regardless of fame and success, we all get broken down in life, and generally, it takes a little while to get back up. Turning weakness into strength takes time, especially for someone that's never confronted weakness before.

I'm not betting on Tiger Woods' redemption because he's Tiger Woods, the most inhuman golfer I've ever seen. I'm betting on him winning again because—and maybe this is where I'm being naive—where Tiger may lack character necessary to weather this storm, this storm is exactly the sort of thing that builds character in people. And beneath the fame and marketing campaigns, Tiger's just a person. Give him time.

For now, it's an open question as to whether Tiger can redeem himself, let alone in time to start winning majors. But it's absurdly pre-mature for anyone to be offering a post-mortem on Tiger Woods.

"Will Tiger Woods win again, or is he finished?"

Amidst a carrer seeped in surreal speculation, that's about as down-to-earth as it gets. You may not identify with where Tiger's been, but chances are, at some point, you've experienced where he is. Shamed into change.

Ten years ago, Tiger Woods' life was fantasy compared with the rest of us. But life, like the ocean, swallows you whole sometimes. And today, he's been spit back at us as a reality that's all too familiar. He's just a guy, wracked with self-pity, self-doubt, and maybe even self-loathing. It happens to the best of us along the way, except we're not on national television every weekend.

But that passes. We get back up, learn from our mistakes, and move on.