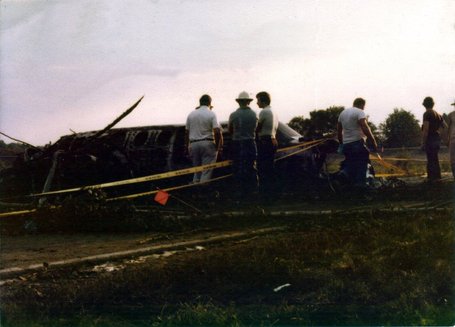 (The wreckage of the crash that cost Thurman Munson his life)

August 2, 1979 is the date of one baseball's worst tragedies -- it's the day beloved Yankee catcher Thurman Munson died in a plane crash outside Canton, Ohio.

"I get chills all the time," Goose Gossage said in 2007. "I think about it a lot. It was, to this day, the toughest thing I've ever gone through as a player." "He was absolutely my favorite teammate. And I had some great, great, great teammates. But he was the best."

In 11 seasons, Munson was an All-Star seven times, a Gold Glove winner three teams, a champion twice, an MVP once, and the father of three kids. He was the first Yankee to be named captain since Lou Gehrig and was the visible face of the "Bronx Zoo." "He always knew exactly when to say something and when to shut up," Ron Guidry said. "And that's why everybody admired him."

On August 2nd, Munson was demonstrating his Cessna Citation to flight instructor David Hall and friend Jerry Anderson. Munson loved to fly and welcomed the ability to see his family more often. The jet cost him $1.4 million. He had only 18 months of aerial experience and was already on his fourth different plane. "People who know anything about flying and aviation knew this was nuts," his wife Diana said.

Munson attempted several touch-and-go takeoffs while he was in the air. After the third landing, Munson invited Hall to take control of the aircraft while Munson handled the throttles. Hall had never flown a Citation before and landed in the middle of the runway. The plane was assuming its fourth takeoff when air-traffic control advised Munson to change directions.

Thurman complied and veered the plane thirty degrees to the right. But he couldn't adjust to the new altitude and couldn't get the Citation high enough. Munson never put the landing flaps down, which would have given the Cessna additional lift. The plane began to descend well short of the runway. The three men braced for the worst.

"N15NY" collided with treetops and skidded along a barren pasture, losing its wings and nose head in the process. It charred the ground as it rocketed forward, colliding with a gigantic stump, flipping around, and finally stopping on a service road 200 yards shy of Akron-Canton Airport. "Thurman flew that airplane to the last nanosecond,"Anderson said. "He kept it under control and brought us down. He never panicked. He saved our lives."

The plane caught fire as soon as it landed. Munson was conscious but had suffered serious spinal damage and couldn't move. Anderson and Hall tried to pull the Yankee to safety but the main door was jammed. Munson's legs were trapped inside the crushed fuselage and wouldn't budge. By the time the two men burst through the emergency exit, the smoke had consumed the entire plane. Hall and Anderson jumped out of the plane knowing that Thurman wouldn't be coming with them.

Munson was pronounced dead on site when rescue vehicles arrived at the scene. Though Munson sustained considerable skin burns and vertebrae damage, it was the smoke from the fire that killed him. He was 32. The NTSB concluded that human oversight, not mechanical error, brought the plane down.

The news of Munson's death stunned his Yankee teammates who were enjoying a rare day off. The team played the following night at Diana Munson's insistence and lost 1-0 to the Orioles. The Yankee Stadium crowd of over 51,000 gave the late catcher a ten-minute standing ovation that left both the fans and players in tears. Owner George Steinbrenner announced that the Yankees were retiring Munson's #15 jersey.

The grieving Yankees attended Munson's funeral three days later. New York played the Orioles again that night and won 5-4 in front of a nationally televised audience. Outfielder Bobby Murcer drove in all five runs, including the game-winner. "I never did use that bat again. I gave it to Diana," Murcer recounted.

The brush that the Cessna Citation first crashed in has since grown over, the trees it clipped have been removed, and the stump it slammed into is long gone. There are two spots in New Yankee Stadium where Munson's death is still visible: the plaque erected of him in Monument Park, and his empty locker which to still bears his name to this day.