...And that's why we love Ron Artest. Most athletes—most people, in general—put up a front. They're too self-conscious to really let you into their world, let you know what they're all about. But Ron-Ron the Rottweiler? Pssh... 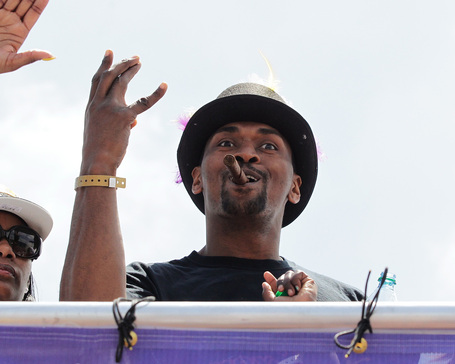 Some highlights from Artest's latest turn at the microphone (courtesy of ESPN the Magazine). Let's begin with Ron's favorite movie:

Titanic. When DiCaprio is trying to save the young lady, that was dope. When she tries to save him, and he dies, that was dope too. That whole situation was tragic. When I saw the baby in the water, frozen? I cried a little, but mostly I was pissed. I'd just had my daughter, so when I saw that frozen baby, I was like, "What the f -- !? That's bull -- !" And let's not forget about Céline Dion. That woman is unbelievable. You know how much I love my music? Well, I wouldn't put out a song for 10 years if that meant I could put out a song with her. Her voice sounds like pure fresh air. It sounds like what it sounded like when the world was created.

Emphasis added. You might think Ron's answer is contrived there. Deliberately zany, or something. But then... There he is comparing Celine Dion to "what it sounded like when the world was created." That's something that you simply cannot make up.

What's his sometimes-favorite place in the world?

At the beach. Man, give me a mango drink, some sand, that water, and it's all good. I love running in the sand. But sometimes I'm scared as hell of water. Whenever I'm out there, I'm thinking, "Damn, some tidal wave is about to come!" Okay, so maybe I'm not totally at peace at the beach.

Duh, it would be weirder if Ron Artest didn't live in fear of tidal waves. Next question. Staying in shape: how does he do it?

My secret weapon is spin class. It's crazy. My first time there, I'm like, "What the hell is this? A bunch of girls and old people on bikes? Easy." So I get on the bike, and within 10 minutes I wanted to quit. But I can't when these girls are hardly sweating. Can't quit. So I kept going. When it's over, I've got a pool of sweat under me. I've never done anything so hard in my life.

(Note: this is a completely accurate description of "spin class." The innocuous name belies the endgame. Bottom line: It's ritualized torture, complete with an overly-chipper instructor and anorexic women shaming you into continuing the horror. Stay away from spinning.)

And if they made a movie about Ron's life...

My character would be a basketball player who secretly doubles as a bounty hunter. None of my teammates know, because when I'm bounty hunting I wear a disguise -- a black leather jacket, nice shoes, some black jeans, definitely black shades, a fedora and a gray beard. Oh, and a cane.

His movie idea continues from there, so head over to ESPN to see how it ends. But really, does it even matter how it ends? As long as Ron Artest is involved, you should be waiting to sign up.* 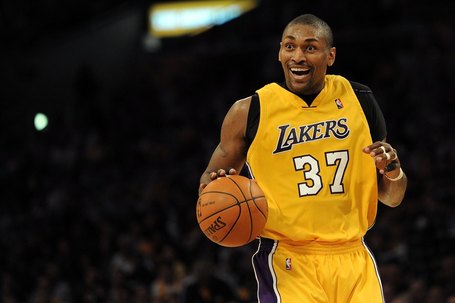