Your Weekend Reading: Some Of The Best Sportswriting Of The Year

Share All sharing options for: Your Weekend Reading: Some Of The Best Sportswriting Of The Year

And it's all about one guy, known by one name. 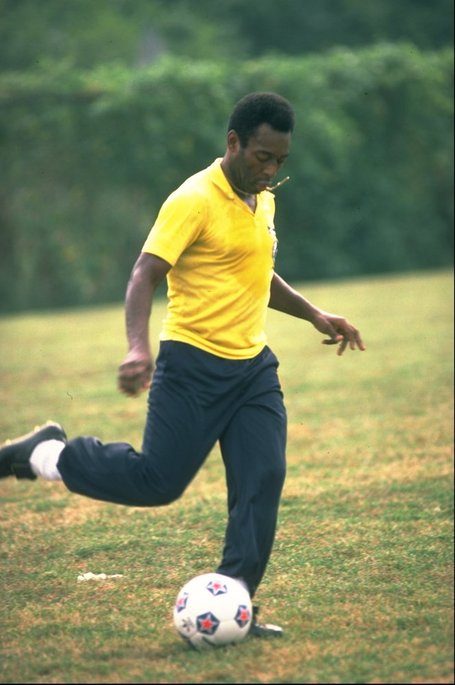 This week at Run of Play, one of the better written blogs on the internet, Brian Phillips commissioned some of the best soccer writers from around the world, and gave them one prompt: Pelé. As Phillips explained the philosophy last Friday:

I can’t shake the sense that we’re missing the boat on Pelé, that, like the Hot Fives and Sevens or The Godfather, he’s become invisible through repetition and influence. We’ve all known his name since the day the atom was split, and I wonder whether what we’re seeing when we watch him is dulled by what we already know and expect. I want to shake that off and make an effort to look at him with fresh eyes.

Thus, I’m announcing the first-ever Pelé Week on The Run of Play. Next week—even if it means not writing much about Liverpool-Arsenal, A Game So Vast We Shall Never Again See Its Like—we’re going to be all Pelé, all the time, with the hope of peeling away some of the layers of familiarity and, if this is even possible, recontextualizing O Rei as a human being.

I've always wondered why people don't do this more often. People like Pelé—or Michael Jordan, or Walter Payton, or Wayne Gretzky, or Tiger Woods, or Bruce Springsteen, or Tupac Shakur—are so brilliant at what they do, they become more than just an athlete, or rock star, or a rapper. Even as they're still alive, we mythologize them beyond mortality.

It's sort of impossible, then, to comprehend the breadth of what these people mean to us. Interpreting their legacy becomes its own kind of art, and there's a whole lot of room for creativity.

Imagining taking ten of the best basketball writers—or any kind of writer—and asking them to write 2,000 words about Michael Jordan. Can't speak for everyone, but that's exactly the sort of stuff I love. So when Andy Hutchins mentioned this on Twitter yesterday, of course I had to dive in. And even though I've never really read much about Pelé, or even watched him play, the results from Run of Play's Pelé Week were just as inspired as I'd imagined. Below, some samples.

First, Pele vs. The Animals:

Why do you watch ESPN instead of Animal Planet? Cute uniforms aside, bears are stronger, giraffes are faster, and kangaroos can jump much higher. Why watch a species that struggles to lift over 300 pounds or run a mile in under four minutes? More intriguingly, how did such a feeble runt of a species come to rule the planet? Luckily, two classic moments from Pelé provide answers.

Next up, a Walker Percy cameo, and a juxtaposition with the Grand Canyon. Seeing:

I have tried, but I can’t see him. All the clips I can find on YouTube (there are many, and I’ve watched them for years) fail to bring him to life. Dribbling and cutting, leaping and heading, passing and shooting—it’s all there but somehow not there. He is The Most Photographed Barn in America. No: he is—Walker Percy got there long before DeLillo—the Grand Canyon.

On his final game, with the New York Cosmos. The End:

What can we make of this gaudy time capsule now? Two quick thoughts. First, for anyone who’s argued that Pelé’s “perfection” as a player is what makes him hard to love—that styles flourish around flaws, and that Pelé’s game was too objectively flawless to be interesting—this should be a deeply humanizing moment: Pelé playing on the fumes of his ability, no longer the best player on the pitch, essentially in the last gasp of a years-long confrontation with mortality.

On his life after soccer, and how that shapes our understanding of him. Stepchild of Time:

Self-preservation doesn’t have quite the public currency that self-destruction has. Even so, Pelé hasn’t preserved himself, in his long and apparently healthy life post-playing career, as a paragon of dignity. In my darkest moments I imagine Paolo Maldini, thirty years from now, shilling for the latest performance-enhancing drugs from Big Pharma and making bright, crazy predictions of success for the football team of Padania. Would a future generation be able to construct any coherent notion of his grace and dignity as a player in the face of such annoying evidence to the contrary? Would such a figure convince you to evaluate his history impartially?

On an ad featuring Maradona, Pele, and Zenedine Zidane. Louis Vuitton and the Eternal Champion:

It has been a long while since I’ve been stunned by an advertisement, let alone one for fashionable suitcases, but the Louis Vuitton ad featuring Pelé, Maradona and Zidane did just that. ... Part of what shocked me was that there now was, apparently, a third person who could stand alongside Pelé and Maradona. Growing up it was incontestable that the greatest football players of all time were Pelé and Maradona. I may be reading too much into a single ad, but it genuinely shocked me to see Pelé and Maradona joined by a third. On reflection, it’s not that surprising, given that these three are the same player reborn.

When we mention soccer, it begins with The King. Even if we don't want it to. Synonym:

What is the first name out of my mouth when the subject of football is brought up? Who do I use to define the sport, even if only through a negative? Pelé. No wonder they call him The King. I need the light, reflected from his regalia, to bring my shadow puppets Garrincha and Puskás to life. There’s some Plato back there somewhere, but I fear I’d get thoroughly lost in that cave.

And finally, a look at the man behind the myth. Pelé as a Human:

At the end of the episode entitled “Brazil” in the excellent documentary series The History of Football, Pelé offers the interviewer a few comments on his own footballing genius. He declares that just as there can only ever be one Michaelangelo and one Beethoven, so can there only ever be one Pelé. Why? Because, he says in Portuguese, “my father is a closed shop.” When the female interviewer fails to laugh, he repeats his words in English, and adds a snipping motion with his finger. “Do you understand?” he says, now staring at the camera with his world famous grin. “My father is a closed machine.”

It's all fascinating stuff, and seriously worth your time if you're soccer and/or good writing. Thanks to Hutchins for pointing me in the right direction, and hats off to Run of Play for a pretty excellent collection of work the past few days.