Photo Of The Day: Long Before Nenad, Rodman Set The Standard

Share All sharing options for: Photo Of The Day: Long Before Nenad, Rodman Set The Standard

Every day, SBNation.com will celebrate a random photo from the past, making your morning a little more colorful.

So far, we can all the photo of the summer has been wild-eyed Nenad Krstic, throwing a chair at a Greek opponent while a. the cameraman looks on unimpressed, b. the horrified women in the crowd, and c. the car, randomly in the background of everything. To capture all that in one shot... That's just excellent.

Outright chaos in so many different ways—it all reminded me of Dennis Rodman. Remember when he would slowly push the refs to the brink throughout the game? Then, once that final technical hit, he'd toss his jersey into the stands and walk out with his hands up, like he's the people's champ or something? Rodman played the game to do the dirty work and provoke authority—nothing more, and nothing less than the most metal basketball player of all time.

Photo(s) after the jump.

Oh, and after he retired, there was his wrestling. Take notes, Nenad: 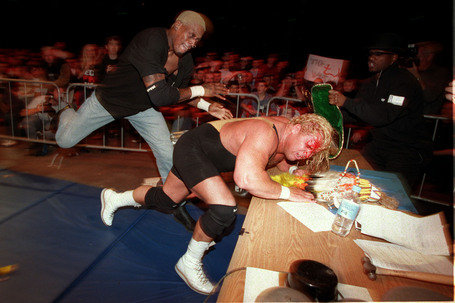 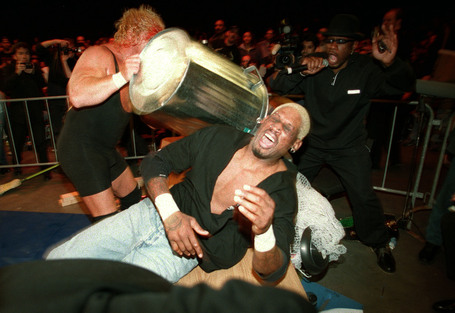 NOTE: the announcer's hilariously exaggerated expression there. Like he didn't know that was coming. And here's an alternate, more insane action shot: 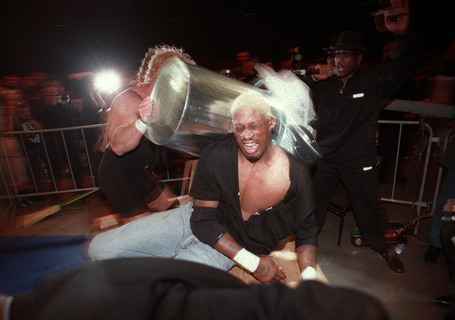 These photos come courtesy of Scott Barbour at Getty Images, who was lucky enough to attend the Superstars of Wrestling on July 30, 2000. And, well... Until tomorrow, remember that there has never, ever been another athlete like Dennis Rodman.