Not so fast. ... which is just the type of phrase you probably won't hear at SB Nation Indiana, which plans to incorporate the Indy Racing League into its unique mix of coverage.

You want speed? Brad Wells, the site's editor, had an eager staff assembled and ready to write before we'd decided when, how and where we wanted to go next with our regional expansion. The result is a huge win for sports fans in the Hoosier state, whether you root for the Indianapolis Colts, follow college basketball or put on headphones as the green flag drops at the Brickyard. 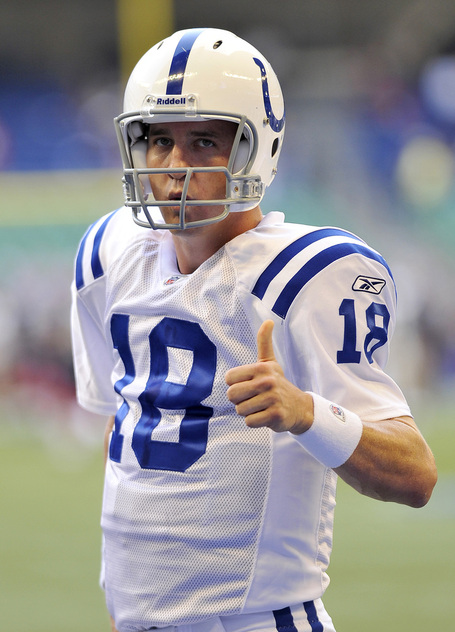 Somehow in this hoops-mad state, football has become king -- at least, the NFL variety has, thanks largely to that fellow above giving SB Nation Indiana the big thumbs-up. The Colts have a recent Super Bowl win, one of the greatest (and most-marketable) players of all time in Peyton Manning at quarterback, and a fancy new stadium. In fact, Lucas Oil Stadium, which the Colts opened in 2008, is set to host Super Bowl XLVI in February.

But while Brad and his crew pegged Manning as the most popular athlete in Indiana, they don't plan to neglect the other sports that give the state its character. You'll get plenty of hardwood coverage, both at the high school and college level, in addition to college football and, of course, auto racing. Which explains Tony Stewart's appearance among the region's top five most popular athletes.

So click on over to SB Nation Indiana and check out what they've got to offer (and make sure you follow them on Twitter as well). And weigh in on SB Nation Indiana's first top five list by voting in our poll. Think the most popular athlete is someone other than Peyton Manning? If so, you're probably nuts, but here's your chance to let them know.