Rajon Rondo, Not On The Team USA: What Does This Mean?

Share All sharing options for: Rajon Rondo, Not On The Team USA: What Does This Mean? 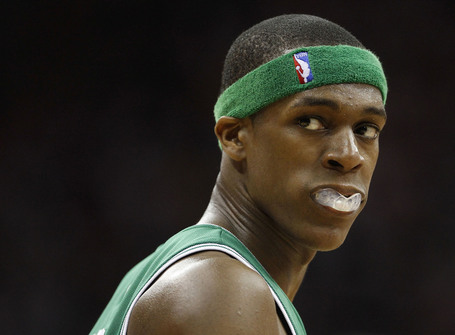 Right up front, the news that Rajon Rondo will not be part of Team USA means that Team USA will be without one of its three most dominant players. So that's number one.

Beyond that, it's hard to say. We weren't in the practices, we didn't watch the Team USA scrimmages, and ultimately, we have no idea whether this move makes sense. Or, to put it differently, THIS MOVE MAKES NO SENSE... Unless there's something we don't know about.

My skepticism toward Mike Krzyzewski has been well-documented, but in this case, my suspicions stem from an ideology that's more basic: It's never a good idea to cut a superstar. People don't do it unless they're stubborn themselves (Coach K!) or they have no choice (Coach K?).

You work with a superstar. They're worth it. Massage his ego, reason with him, play mind games. Whatever it takes. Because you can't teach talent, and coaching can't turn Eric Gordon into Rajon Rondo.

Watching Rondo weave in and out of French defenders during America's exhibition game a week ago, it seemed as though this month's World Championships would be yet another reminder: Rajon Rondo is world class. He looked like the best player on the floor last weekend, and every time he checked back into the game, the Americans picked up their play.

...Then this happened, and we're all left scratching our heads.

On defense alone, Rondo's worth his weight in gold, let alone the problems his speed and quickness can cause for opponents trying defend him. So let's assume Rondo wasn't cut because of poor shooting; that would be stupid, even by USA basketball's standards.

Why he's gone then? I see three possibilities:

If number 3 is accurate, then it's certainly a departure from Rondo's narrative the past 12 months. But not entirely unpredictable. Last June, the Celtics entertained the idea of trading him, and all throughout the Boston media, rumors swirled that Rondo "wasn't a good teammate." The storm quickly passed, though, after the team failed to field any realistic offers for their most promising young player. And when Rondo quickly took charge this year in Boston—dazzling the league like never before—the team gave him a hefty contract extension, ensuring that the turmoil was behind them.

Then, as the team struggled toward the midpoint of the 2010 season, Rondo went public and blamed Boston's struggles on "locker room issues."

Even after that, as the season progressed, and especially in the playoffs, Rondo's 5-year, $55 million extension looked more and more like a bargain. By June, we talked about him as a max-level player that the Celtics had stolen on the cheap. Not the greatest story for Rondo's bank account, but considering his towering popularity in Boston, he wasn't exactly suffering. After slipping to the late-first round, toiling on a last place team, then facing constant questions about his ability to play next to Kevin Garnett and co., TD Banknorth was flooded with people chanting his name and wearing his jersey. He'd finally Made It.

But maybe Rondo's more complex than the Cinderella role we've cast for him.

Last June's rumors seemed silly a year later. But now it's a year and two months later, he's off Team USA, and you have to wonder: what if the Celtics—and Team USA—know something we don't? What if Rondo's a locker room cancer in a pass-first point guard's clothing?

Either that, or Team USA just screwed up an easy decision. ... Right?