Photo Of The Day: Is This How The French Play Rugby?

Share All sharing options for: Photo Of The Day: Is This How The French Play Rugby?

Every day, SBNation.com will celebrate a random photo from the past or present, making your morning a little more colorful. 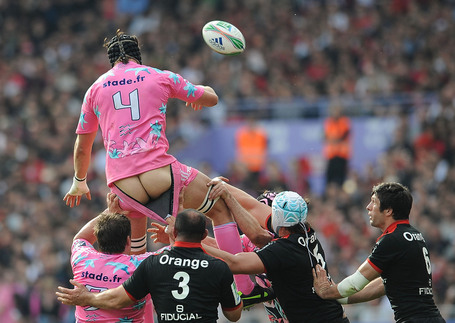 The caption from Getty Images:

Tom Palmer of Stade Francais has pants shorts pulled during the line out during the Heineken Cup Quarter Final match between Stade Toulousain and Stade Francais at the Stade Municipal on April 11, 2010 in Toulouse, France.

Oh. Pants shorts during the line out. In the Heineken Cup Quarter Final, of course.

So, yeah: I'm still not sure what sport this, but guessing some variation of rugby. The French variation, where everyone ignores the ball and grabs the one guy's ass? ... Maybe.

Thanks to Tom Palmer at Getty Images for justifying my skepticism of the Club Rugby guys in college, and click on the image to enlarge and enhance, if you'd like a better look.