A Discussion Of Brett Favre And Why Everyone Loves Him

Share All sharing options for: A Discussion Of Brett Favre And Why Everyone Loves Him 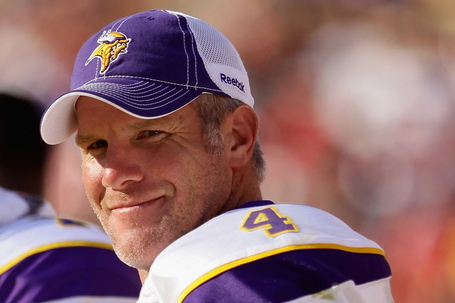 Brett Favre: It’s been great to make an extra $25 million the last few years. I just love playin football. Might play until I’m 50. Heck, I’d play for free, if they’d pay me another $25 million.

Terry Bradshaw (actual quote): "I mean, we don’t see him do a thousand commercials so when we see one like Wrangler, I say he must really like those jeans. It’s refreshing."

Peter King (actual quote): "...classic Favre. He picked the time where the world would be most focused on something else, so he could get the minimum amount of attention. Beautiful."

America: WILL YOU PEOPLE PLEASE GO AWAY? ALL OF YOU. STOP. TALKING.

Sean Salisbury (actual quote): "Brett Favre is everything that is good about football."

Sean Salisbury: And if we’re going start getting bent out of shape people for sending around pictures of their manhood… Let me tell you something: Until you’ve played in the National Football league, you wouldn’t understand. It's a pride thing, you know?

Sean Salisbury (actual quote): "I love Brett Favre, I really do. I know it sounds cliché but I love the guy.”

Sean Salisbury (actual quote): "You give me a leader, and I'll show you a winner.  You give me a coward, and I won't show you Brett Favre!"

Sean Salisbury: (sobbing) I don’t even know where I am right now.

Sean Salisbury: [sends picture of his penis to Brett Favre]

Can You Handle The Truth? What Happens When NFL Players Start Getting Real