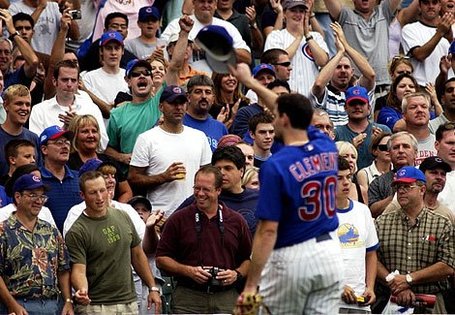 This isn't normally the type of article I write, but I do think it's interesting to look at where the baseball standings were on August 28, 2003. Five National League teams were tied for the wildcard position, with another three teams within one game of the loss column. An eight-team race with only a month remaining in the regular season -- you don't see that everyday.

Montreal Expos: the 'Spos were the best story of the year. Threatened by contraction only a year earlier, the Expos split time between Olympic Stadium in Montreal and Hiram Bithorn Stadium in Puerto Rico.

Despite traveling to three separate countries over the course of their schedule, and despite having an incredibly small payroll, the Frank Robinson-led Expos were the feel-good story of 2003 and finished with a winning record. Sadly, the team lost nine of their next ten games to completely fall out of contention. The team's star player, Vladimir Guerrero, left for the Anaheim Angels a year later, and due to poor attendance numbers in Montreal, the team moved to Washington D.C. in 2005.

Houston Astros: technically, the wildcard race was a 7-team race, but because the NL Central-leading Astros were tied with the Cardinals, eight teams were involved. Houston would lose the Central by a single game while finishing as the runner-up in the wildcard too. Houston later added Roger Clemens and Andy Pettite, and with their already formidable batting order, the Astros went to the World Series in 2005. There they were swept by the Chicago White Sox.

Philadelphia Phillies: every season, the Phillies were the dark horse team that could have been a contender but oddly wasn't. This year was no exception. On September 19, with less than ten games to go, Philadelphia was atop the wildcard standings. But in true Philadelphia style, the Phillies lost seven of their last eight games to erase any shred they had of the postseason. In 2008, the Phillies finally made it to the World Series. Less than a handful of players from the '03 team were on the 2008 version.

Florida Marlins: with 72 year-old Jack McKeon at the helm, the Marlins went on a tear down the stretch. After August 28, the Marlins won 13 of their next 15 games and 21 of their last 29. They finished four games ahead of the runner-up Astros, turning what was a competitive wildcard chase into a runaway. The Fish then beat the Giants and Cubs to advance all the way to the World Series, and in beating the New York Yankees, became the second wildcard team to win it all.

After the season, the small-market Marlins decided it wasn't worth it to keep their star players around. From Ivan Rodriguez to Josh Beckett, Miguel Cabrera, Carl Pavano, Mike Lowell, A.J. Burnett, Dontrelle Willis, and Derrek Lee, the team went on a complete firesale. In only four years, every single player from the 2003 championship team was off the roster. And people wonder why the Marlins get bad attendances... It's hard to follow a team when you know they'll get traded as soon as they win.

St. Louis Cardinals: from 2000 to 2006, the Cardinals won the National League Central division... except for 2003. Never down by more than a half a dozen games, the Cards went .500 in September and failed to make up enough ground. They finished just three games out of the Central and six games behind the Florida Marlins. With mostly the same players, St. Louis went to the World Series in 2004 and 2006, winning it all on their second try.

Arizona Diamondbacks: just two years after beating the New York Yankees in the World Series, the D-backs were once again in playoff the mix. Injuries would prove costly however. The dynamic pitching duo of Curt Schilling and Randy Johnson, who had both won 20 games the previous two seasons, missed a combined 29 starts. Further injuries to Tony Womack, Matt Williams, and Byung-Hyung Kim sunk the Diamondbacks' fate. After winning the NL West two years in a row, Arizona finished 15.5 games out of first in the NL West and 7 games out in the wildcard.

Los Angeles Dodgers: LA stayed competitive thanks to their excellent pitching. The Dodgers posted the best ERA in the National League and featured Cy Young winner Eric Gagne, who had the greatest season of any closer in history: 55 saves, 0 blown saves, a 1.20 ERA, and 137 strikeouts in just 82.3 innings. The Dodgers' bats failed to carry their weight. LA ranked in the bottom five in the National League in runs, hits, doubles, walks, and home runs and lacked a single batter who hit over .300. LA lost 9 of their last 14 and finished six behind the Marlins for the wildcard.

Chicago Cubs: last, but not least, the Cubs. Chicago would not win as many games as the Marlins, but by finishing ahead of the Astros and Cardinals, they conquered the NL Central and got into the postseason nonetheless. The Cubs and Astros were tied with only three games to go; Chicago won two of their final three games while Houston lost two of three.

The Cubs made it all the way to the National League Championship Series, where they collided with the wildcard-winning Florida Marlins. Chicago led the series 3-2 with games 6 and 7 being played in the windy city, and had their top two pitchers, Kerry Wood and Mark Prior, going in both contests. The Cubs lost both matches. In one of them, a foul ball veering into the stands was deflected by Steve Bartman, who would become the most infamous fan in sports history. The Cubs' defeat was likely their most painful in franchise history; never had they come so close to victory in defeat.