Shaq To The Boston Celtics? Oh, That's A Terrible Idea

Share All sharing options for: Shaq To The Boston Celtics? Oh, That's A Terrible Idea

The thing is, all the pieces were in place for Shaq to fade gracefully into the sunset. He'd go over to Europe and play for some Greek powerhouse, bank a cool 10 million Euros, and maybe make an appearance at All-Star Weekend in L.A. next year. You know, to screw with Kobe's party.

But then Boston has to go and reportedly offer a life preserver, and yet again, we're left pretending that Shaquille O'Neal still matters more than say, Marcin Gortat. Err... Does he even matter as much as Marcin Gortat?

Yes, but not in a good way.

But again: Shaq is a terrible, terrible defender at this point in his career.

And for a team like Boston, whose calling card is playing lockdown team defense, it's a little counter-productive to have some club-footed behemoth on the court, dragging ass to and fro, then demanding the ball in the post on the other end.

Defenders will call this "Kendrick Perkins insurance," and remind you that the Celtics aren't risking much. But this is Shaq in 2010, not 2000, 2005, or even 2008. At best, Boston gains nothing. At worst, he dupes Doc Rivers into playing him in the playoffs, and it sinks the Celtics at the worst time possible.

Boston should know better than most. The Cavs tethered their hopes to Shaq, and it's part of what allowed Boston to pull off the biggest upset of the 2010 playoffs. Don't the Celtics remember that?

As someone who likes the Celtics and still has a budding mancrush on Rajon Rondo, here's to hoping someone reminds them while there's still time: SHAQ IS SO, SO WASHED UP. 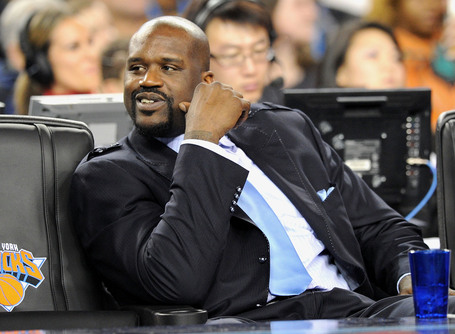