A lot of times when I tell people I write about sports, they'll say, "That's awesome!" and then the conversation will progress. Pretty soon it becomes, "Have you ever considered writing about something like politics?" With the implication being that writing politics is somehow more profound and worthwhile. Whatever.

You want to know why I prefer writing sports? Because John Boehner would never take to his Twitter account and offer $5,000 to any of his followers who "slapped the shit out of" a rival. But that did appear on Carmelo Anthony's twitter account earlier this weekend. In fact, he took it a step further—keeping it really real—asking for video proof of the attack on Kat Stacks, who is... Well, I have no idea who Kat Stacks is.

In any case, one anonymous video blogger asks the operative question: "Is Carmelo keepin' it real, or is Carmelo a case of when keepin it real goes wrong?" ... Or, a third option: Was someone playin' on his phone?

Carmelo Anthony now claims option three: someone was playing on his phone, and his account was hacked. And it's a vaguely reasonable explanation—people's accounts get hacked all the time. But here's my thing: anyone smart enough to hack his account is probably too smart to put forth such an accurate Carmelo Anthony impersonation. 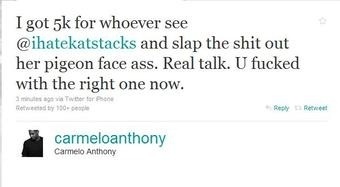 Someone could make up the "slap the shit out of" part of this, but "pigeon face ass" is pretty goddamn authentic. You're telling me someone hacked into his account and just happened to feud with the exact same random celebrity that his wife had been feuding with? Real talk: That's naive as s**t.

Feel free to continue this investigation into the Twitter beefs of pseudo-celebrities, but personally, if I delve any deeper into this world, it's a wormhole I may not escape. Why does LaLa hate Kat Stacks? Is Carmelo keeping it real? Should I start video blogging on YouTube? Or maybe I can just start writing like MediaTakeout, a news organization apparently designed for 6 year-olds and/or adults with dyslexia:

MediaTakeOut.com learned that NBA superstar Carmelo Anthony is about to be in a WORLD OF TROUBLE . . . with the NBA . . . and possibly with the POLICE.

But LaLa's tweets only served to ENRAGE her baller hubby. That's when, MediaTakeOut.com learned that Carmelo Anthony offered $5,000 to anyone who would "slap the sh*t" out of "pigeon faced" Kat Stacks. And what's more - he then posted a PHOTOGRAPH of the money.

ADMIT IT . . . All of this CRAZINESS sure beats the HELL out of boring POLITICS.