Aftermath, Montreal: The Story Of How Little RAB Racing Beat The Big Boys

Share All sharing options for: Aftermath, Montreal: The Story Of How Little RAB Racing Beat The Big Boys

It was only a few weeks ago when team owner Robby Benton stood on the floor of the RAB Racing shop and pointed toward a few of his nine employees.

"Honestly, if I didn't have the people I have, I probably would have walked away from this a couple months ago," he said then. "It's been tough."

The balance sheet and the sport hadn't been kind to Benton, 31, and his team. With the organization not daring to look any further ahead than a few weeks at a time, RAB desperately needed some sort of good news to keep going.

On Sunday, the news was better than good.

It was improbable, incredible and inconceivable, all at once.

Robby Benton and RAB Racing found themselves in a place beyond where even the team owner had dared to dream: Victory Lane.

Boris Said's thrilling side-by-side race to the Montreal finish line with Max Papis resulted in the first-ever win for RAB and gave the youngest Nationwide Series team owner the kind of moment that makes everything worth it.

And for Benton, that's saying a lot.

If Robby Benton had his way, he wouldn't have made it to Victory Lane as an owner, but a driver. From 2000-03, Benton tried coming up through the ranks of stock-car racing, attempting starts in ARCA, Trucks and the then-Busch Series while also test-driving a Cup car for Robert Yates Racing.

But Benton didn't have the resources to get a good ride. So after taking a long look in the mirror, he decided to give up on his racing dream.

"I started feeling guilty about spending my dad's retirement money trying to race," he said. "It takes millions, and my family had thousands."

So along with Brack Maggard, who owns a concrete formwork company, Benton and his father Bobby started RAB as an ARCA team.

The team would occupy the same Concord shop where Cale Yarborough's Cup team once operated, and where a young Benton tagged along on sales calls that his dad made as a Mac Tools distributor.

It didn't take RAB long to find ARCA success, and when the team finished fifth in the points in 2007, Benton got a call from a man named Tony Townley inquiring about a ride for his son, John Wes.

So Benton partnered with the Townleys and, after John Wes finished seventh in ARCA points in 2008, moved up to the Nationwide Series last season.

It didn't go well. John Wes wrecked more often than he finished, and Richard Childress Racing swooped in and took the Zaxby's sponsorship money at the end of the season.

Benton said RAB "made that (Zaxby's) program look richer than it was," which had attracted the attention of larger teams. Still, when Tony Townley told RAB of the Childress opportunity, Benton understood.

"I told him, 'If John Wes was my son and he had the opportunity to step into the Earnhardt legacy, and they're promising him a lot...'" Benton said, voice trailing off.

He wouldn't stand in the Townleys' way. Their departure left RAB without a sponsor and driver to start this season, though Benton felt confident that with a full fleet of eight cars and a debt-free team in place, he could attract funding.

"I was dead wrong," Benton said. "We couldn't put anything together."

RAB ran the first four races with Scott Riggs out of its own pocket after sponsorship never surfaced, but Benton soon realized the idea wasn't financially viable, "even with scaling back and cutting corners."

One after another, drivers who had one or two races' worth of sponsorship rotated through the No. 09's seat – 10 different drivers in 16 races. And because there was no full-time driver, Benton couldn't even employ a full-time crew chief.

"After you go through what we've gone through this year, with having a different driver every week, you feel like you're starting over every week whether you're wrecking or not," Benton said. "To me, that's more discourging than having to come home and fix a race car every week (like in 2009)." 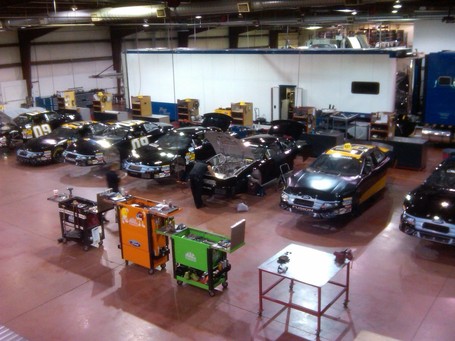 So when Childress booted Townley from its No. 21 car, Benton began campaigning to get his former driver and sponsor back.

Townley had gone back home to Georgia after being released from Childress, bitter about his racing experience and unresponsive to Benton's pleas to give it one more shot.

"I wanted to get him back on the horse that he got kicked off of," Benton said. "But he didn't want anything to do with it. We all begged him to just try it one more time. He wouldn't do it."

Townley enrolled in a full slate of community college classes and worked on his grandfather's farm. But after clearing his head and taking a step back, he agreed to give it one more try.

And with Townley's return came a few of the Zaxby's dollars that RAB needed to continue operating.

"I believe in John. I think John is a lot better than anybody realizes," Benton said. "It's easy for people to say, ‘Well hell, Robby, the only reason you're behind John Wes so much is because he's coming in and saving your race team.'

"I don't know how it's going to go, but I know that I owe the kid a good opportunity. If it doesn't work, then he can walk away on his own terms. Right now, he's been pushed out."

Benton didn't want to leave the sport on someone else's terms, either. But without Zaxby's, RAB's survival was in doubt.

"What was the future? Don't know."

Townley agreed to return for select races, but those didn't include the road courses at Watkins Glen and Montreal. Benton had lured road-racing ace Boris Said before the season to drive in those two events, hoping for a couple top-10 finishes that might energize his team.

And if things went really well, Benton thought, maybe RAB could even get a top-five.

A win? Let's not get crazy here.

"We know our place," Benton said. "And we don't try to make it something that it's not."

Not every team in NASCAR can contend for wins. Far from it. And yet, they keep plugging away as if they might get a shot someday.

"We're all lucky," Benton said. "We need to remember that. And there's a lot of people in the garage who forget that. All those people in the stands? They have real jobs. And they're paying good money to come watch us do what we love to do."

Intensely quiet with steely eyes, Benton doesn't usually smile much while talking. When he does, it's only a hint of a grin – just enough to let you know he has a sense of humor.

But on Sunday, he understandably had one of the biggest smiles of anyone in Victory Lane.

What must it have been like for this man? Benton saw his team go from teetering on the brink of collapse a couple months ago to rejoicing in a frenzied, champagne-filled celebration. And collecting a check for more than $100,000.

RAB's win was a win for the little guy, a victory for all those small teams in NASCAR who cling to the hope that one day, they can run with the big boys.

"I don't even know what to say," Benton said afterward. "It's not going to set in for a long time."

Imagine how big his smile will be when it does. 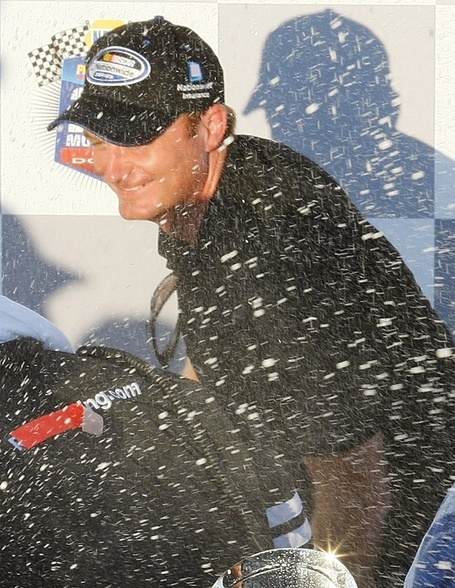