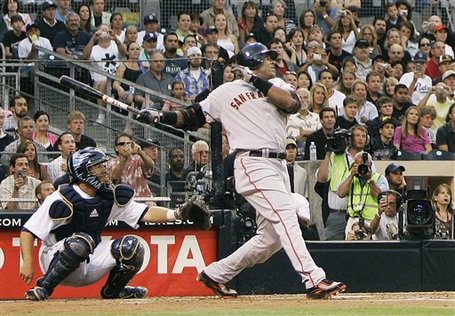 In 1944, Shepard was fighting in World War II when his plane was shot down by a German air fighter. He became a prisoner of war and had to have his right leg amputated due to the injuries he incurred from the crash landing. He was given an artificial leg from a Canadian prisoner, who had crafted it for him using loose scrap metal, and was released a year later in a prisoner exchange.

Shepard tried to rekindle his baseball career when he returned to the United States. After throwing in a series of exhibition games, he was picked up as a pitching coach by the Washington Senators, who had little intention of using the war veteran in an actual game. But on August 4, 1945, the Senators found themselves strapped for pitching. They were playing in their fourth consecutive day of doubleheaders, with another one to be played the next day. And with the visiting Boston Red Sox leading 14-2, Shepard was given his chance in the third inning.

"I came in with the bases loaded, and I struck out George Metkovich to get us out of it," Shepard said years later. "What made me proud was that I've seen athletes just choke up, not being able to react to a situation. There was much more pressure on me than it seemed. If I would have failed, then the manager says, 'I knew I shouldn't have put him in with that leg.' But the leg was not a problem, and I didn't want anyone saying it was."

The left-handed Shepard pitched five-and-a-third innings, allowing a single run on three hits and becoming the first big leaguer to ever wear an artificial limb. It was the only game he ever played in, yet his story was so inspiring that when he died in 2008, his obituary was posted in the New York Times, USA Today and Washington Post. However he never matched the fame of Browns outfielder Pete Gray, a one-armed player who was so popular that he had his own comic book.

Playing for the New York Mets, outfielder Joel Youngblood drives in what would be the game-winning RBI off Ferguson Jenkins of the Chicago Cubs. But before the start of the 4th inning, he is subbed out by Mets manager George Bamberger, who informs him that he has been traded to the Montreal Expos. Not only that, but the 'Spos were short on players and wanted him to be in Philadelphia when they faced the Phillies later that day.

"I felt that I had been traded," Youngblood recalled later in the day. "After I talked to (Mets GM Frank Cashen), I made plane reservations immediately. I showered, packed all my stuff and checked out of the hotel when I realized I had left my glove in the dugout. I went back to the ballpark to get it and made it to the airport 20 minutes before the flight took off. I had dinner on the plane and caught a cab here (to Veterans Stadium). It's funny -- I left there in the third inning and I got here in the third inning."

Youngblood entered the game in the sixth inning and managed to get a hit off Steve Carlton, though it wasn't enough to give him back-to-back, game-winning hits with separate teams. Still, he was the first player in 62 years to play with two teams in one day and was the only one to have a hit with both teams. 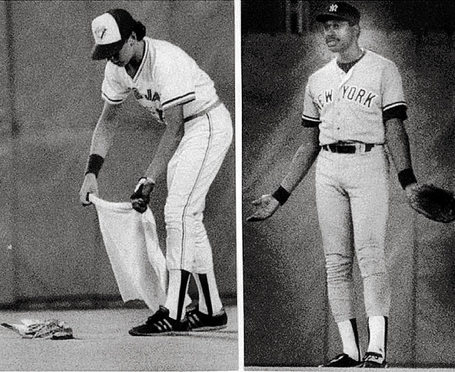 (The seagull incident. Photo courtesy of the Associated Press)

Yankees' third baseman Dave Winfield was warming up in the middle of the fifth inning at a game in Toronto. As he turned and threw the baseball back to the Blue Jay's ball boy, a seagull that had been idly perched in left field flew into the path of the toss. The gull was killed instantly, and the game was delayed as the ball boy wrapped the bird in a cloth and lifted it off the field. Winfield was booed fiercely by the fans at Exhibition Stadium and was even assaulted with projectiles. Afterward, Winfield was arrested by the police and charged with cruelty to animals.

"I'm sorry that one of Canada's fowls is no longer with us but, believe me, it was not intentional," Winfield said. "I was throwing the ball over to the ball boy. I was throwing it in the direction of the bird because that's where it was. It just fell over and I feel kind of bad."

"They say Winfield hit the gull on purpose," Yankees manager Billy Martin said. "They wouldn't say that if they had seen the way he’s been throwing. He hasn’t hit the cutoff man all year."

A day later, Winfield got a call from the police, who had been convinced that the incident was an unfortunate accident. Winfield was booed mercilessly in Toronto for years, but when he joined the team and helped them win a World Series ring, the seagull faux pas was long forgotten.

Rod Carew of the California Angels gets the 3,000th hit of his career off Twins pitcher Frank Viola. Carew, who would finish with 3,053 career hits, won seven batting titles and left the game with an impressive .328 average. 1985 proved to be the final year of Carew's career, as no further teams took interest in the Hall of Fame third baseman. In 1995, Carew was given $782,000 from an arbitrator, who ruled that baseball owners had purposely colluded to keep Carew on the sidelines in 1986.

Also reaching his respected milestone was White Sox pitcher Tom Seaver, who notched the 300th win of his career at Yankee Stadium. Fittingly, he did it on "Phil Rizzuto Day," fitting because he would later become Rizzuto's broadcast partner for Yankee games. Seaver, known as one of the greatest pitchers of all time, was inducted into the Hall of Fame in 1992 with 98.8% of the votes -- the closest a player had ever come to being unanimously selected. Of the five ballots that did not include his name, three were left intentionally blank as a protest to Pete Rose's exemption from the Hall of Fame.

On a side note, both Seaver and Carew won the rookie of the year awards in 1976 (Carew in the American League and Seaver in the National League). 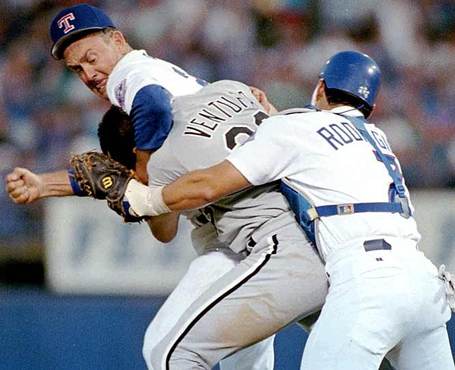 Nolan Ryan was one of the most intimidating pitchers of all time. He was the only man to strike out 5,000 batters and was synonymous for his wicked fastball and propensity to pitch inside. But in 1980, he was involved in an altercation with Dave Winfield after beaming him with a fastball. Winfield, a notorious seagull murderer, rushed the mound to take a few swings at Ryan, who protectively huddled on the ground to shield his pitching arm. The reaction Ryan received was poor and he vowed to do better the next time he got in a fight.

He didn't get a chance to redeem himself until August 4, 1993, when a young Robin Ventura charged the mound in the third inning.

By then Ryan was 46 years old and pitching in his final season. When he nailed Ventura in the ribs, the 26-year old third baseman blitzed the Hall of Fame pitcher. "I decided I was going to be the aggressor," Ryan said. "I wasn't going to just take it." Nolan was more than prepared and wrapped him in a head lock, landing six blows to the top of Robin's head as the benches cleared. Both Ventura and White Sox manager Gene Lamont were ejected, while Ryan, who barely moved off the pitcher's mound, stayed in the game. He then retired twelve of the next thirteen batters and earned his 322nd career win.

"It's no secret that he was throwing at me, and I have to do what I have to do to protect myself and I don't care who it is," Ventura said after the game. "I'm all right. He gave me a couple of noogies, but that was about it."

Ventura went on to have a terrific career in the big leagues, good enough to make it on the Hall of Fame ballot in 2010. He finished with 18 career grand slams, the third most in history, and six Gold Gloves. Yet he could never surpass the lasting image of his career: getting worked by 46 year-old Nolan Ryan. 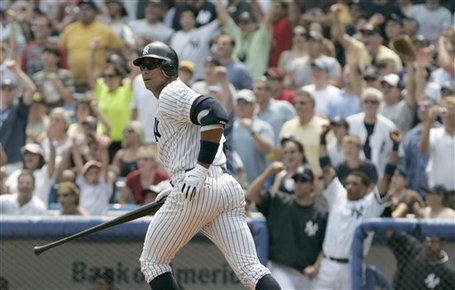 Two long delayed, epic milestones were reached on Aug. 4, 2007, by the two of greatest hitters of the steroid era. The first one came from Alex Rodriguez, who sailed a three-run homer to left field for the 500th of his career. A-Rod had a contentious relationship with the New York fans, and it was muddied even more when his steroid use was revealed, but on this day it was all smiles and cheers. The future MVP even gave a curtain call to the faithful at Yankee Stadium.

It took him nine games to reach the mark, but in doing so, he became the youngest player to reach 500 home runs. At 32 years and 8 days old, Rodriguez accomplished it in 330 less days than the previous record-holder, Jimmie Foxx.

Nine hours and 2400 miles away from Rodriguez's momentous homer, a much more significant landmark was being reached. It was a long, long, long time coming, but Barry Bonds finally tied Hank Aaron as the all-time home run king. Bud Selig was in attendance, though from his reaction, it was obvious that he didn't want to be.