The Brett Favre Retirement Watch hit full tilt on Tuesday, and who knows how long it'll continue? But with the ole gunslinger once again considering a ride into the sunset, we consider how he went from American hero to heel in three years.

Brett Favre continued: "If I felt like coming back—and Deanna and I talked about this—the only way for me to be successful would be to win a Super Bowl. To go to the Super Bowl and lose, would almost be worse than anything else. Anything less than a Super Bowl win would be unsuccessful."

"And honestly, the odds of that, they're tough. Those are big shoes for me to fill, and I guess it was a challenge I wasn't up for. " With that, we said goodbye to Brett Favre on March 5th, 2008. 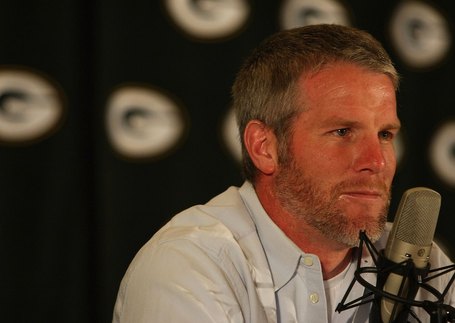 And just like that, the Packers traded Favre's rights to the New York Jets, and we welcomed back the ole gunslinger, ready to reprise the role of Jordan on the Wizards and Montana on the Chiefs. 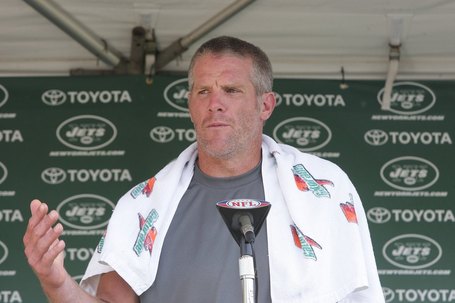 "There are several things that went into decision but most importantly, the most important thing, was that physically, you know with my shoulder the last half of the year, it hampered the way I played," Favre said on February 11, 2009. "I'm 39, I had several [surgery] options and to let it heal. How that would affect me in terms of playing I had no idea and it wasn't something I was going to risk."

"It sucks getting old," Favre said. "At 40 years old, your mind tells you that you can do all the things you could in your younger years but the body doesn't cooperate. ... I'm an emotional guy, and I'm sure people are tired of seeing me get emotional. But I'm going to just quietly step away..."

And that was the end of the Brett Favre era. As the New York Times remarked, it felt real this time. 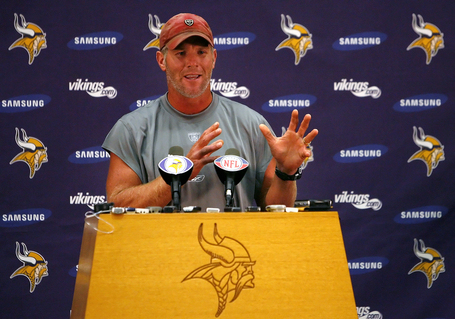 And just like that, Favre was back. Again. "As friends and family told me," he said, "You never know until you take the chance." Soon, he was filming commercials mocking his indecision, leading thrilling late-game comebacks, and smilin' his way to the top of the NFC and the forefront of our consciousness. And none of it mattered, really.

Whatever happened last year and whatever happens this year, Brett Favre is the still guy that un-retired two years in a row, and the second year, joined his former team's mortal enemy. He's still the guy that sold himself for years on the strength of Integrity and Humility all sorts of other hallowed Intangibles, and then pulled a 180 when it came time for him to personify any of it. Brett Favre in 2010 means something completely different than Brett Favre in 2007.

Now, it doesn't even matter whether he retires. He's already sealed his legacy.

It doesn't matter that Favre is the all-time NFL leader in touchdowns, consecutive starts, wins, passing yards, and a slew of other records. It doesn't even matter that Brett Favre's a football player.

He's just a nuisance, popping up year after year like some motif in a heavy-handed media commentary, destined to bludgeon us over and over again until we finally get the point. It'd sound crazy to anyone that's been in a coma for the past few years, but Brett Favre makes football less fun for football fans. Yes, it's true. The league-leader in smiles produces mostly groans these days. So now, if Favre's really retiring, and it's time to write the eulogy here, how can we be expected to respond? By getting misty over that '96 Super Bowl like none of this ever happened? Forget it.

Then there's Brett Favre, the self-aggrandizing, attention-seeking whore who acts like a humble, soft-spoken guy that only cares about the simple pleasures. Workin' the land and such. Ugh.

And don't blame the media. By now, Brett Favre knows exactly how the media handles this sort of thing. If he's going to retire, it's alright for us to expect him to be responsible about all this and just call a press conference. If he's not going to retire, it's okay for him to just show up to training camp like any other above-average quarterback. And if he's still undecided, all he needs to do is send a simple text message to Ed Werder or Chris Mortensen or Peter King or one of his other media minions.

Instead, we're left with the annual Favre-circus that we deal with every August. Yet another nail in the coffin that holds whatever happy memories we have of Brett Favre in the NFL.

Which is sad, because there were definitely happy memories. This is a guy that beat the odds by even making the NFL out of tiny Southern Mississippi, the only college that offered him a scholarship. He battled immaturity in his early years and he beat it. He went to Green Bay, became an MVP quarterback and surefire Hall-of-Famer. Then he got addicted to pain medication, and he beat that, too. Then he beat the Patriots and won a Super Bowl. His wife beat cancer. When his father died out of nowhere, he beat the shit out of the Oakland Raiders the next day. Even if you grant that a lot of it was commercialized, Brett Favre was a legit American hero.

He had the numbers, the rags-to-riches pedigree, the smile, the aw-shucks soundbytes... Brett Favre was everything that America could ever want in our athletes. Now, he's everything we despise.

He's Terrell Owens doing sit-ups in his driveway. He's Albert Haynesworth, playing mind games with every franchise that's employed him since 2007. He's Roger Clemens, the hero-turned-heel that refuses to acknowledge his former fans. And yes, he's LeBron James. He's as bad as any of 'em, and maybe worse than all of 'em. Favre just has stronger relationships with the media that's supposed to be killing him for all this stuff. 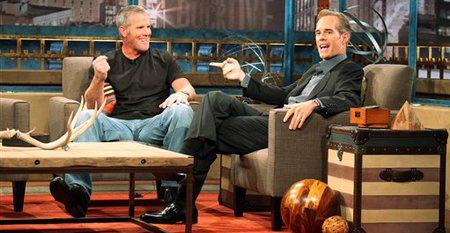 If Favre leaves, it'll be two seasons too late. If Favre stays, we'll just be dreading next season's Favre histrionics. Favre Favre Favre Favre Favre. That's his legacy. Ubiquity in the worst way possible. You can't stop him, you can only hope to ignore him.

By refusing to be transparent about his motives, year after year, he's laid his character bare over and over again, until everyone gets the point. Call it the ole gunslinger motif. At first, it was mostly Packers fans that picked up on it. Then he came back to the Jets and acted like he was doing the franchise a favor by spearheading them to a lofty 9-7. So New York fans caught on. Then came last season's flirtations with the Vikings, and the rest of the NFL caught on, too. Only Vikings fans held out. Now, after postponing ankle surgery, here he is again, and he's either ditching the Vikings at the 11th hour, or maybe holding out for more money. Now the Vikings fans get it, too. Everyone understands Brett Favre in 2010, and we're all tired.

But it's August 2010, and here's Brett, selling his act all over again. Does anyone still buy this crap?