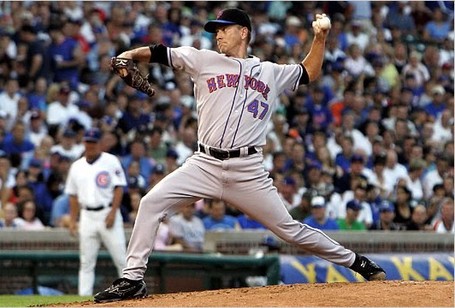 Reaching the plateau one year after setting the single-season home run record, Mark McGwire belts the 500th home run of his career off of Andy Ashby. For McGwire, it was the last milestone home run of his career. He would finish with 583 career home runs before retiring as a sure-fire Hall of Famer... Unfortunately, steroid revelations got in the way a bit.

McGwire hit a combined 135 home runs in 1998 and 1999, yet he failed to win the MVP in either season; in '98 it went to Sammy Sosa, and in '99 it was Chipper Jones. McGwire became almost exclusively a home run hitter in his final year with the Cardinals; he batted just .187 and was among the leaders in strikeouts in 2001. McGwire had only 56 hits that season, but more than half of them, 29, were for home runs.

Down a dozen runs to the best team in baseball, the Cleveland Indians pull off the largest comeback in MLB history. The Indians scored 3 in the seventh, 4 in the eighth, and 5 in the ninth to send it to extra innings. Then in the 11th, a Jolbert Cabrera base hit sent the crowd home happy.

Tom Glavine becomes the 23rd pitcher to reach 300 wins, joining a prestigious group that included Cy Young, Walter Johnson, Tom Seaver, Steve Carlton, and Nolan Ryan. Glavine won 20 games five times in his career as well as two Cy Young Awards and one World Series championship. A high school hockey star, he was originally drafted by the Los Angeles Kings of the NHL before signing on with the Atlanta Braves. At first he struggled, losing a National League-high 17 games in 1988, but he eventually found his groove and posted double-digit wins in 18 of the next 19 seasons.

Glavine spent the bulk of his career in Atlanta, where he teamed with John Smoltz and Greg Maddux to form one of the best pitching rotations in baseball. With the help of those three, Atlanta won 14 division titles in a row, and quickly fell back to earth when Maddux and Glavine left for bigger markets (Glavine in '02 to New York, Maddux in '04 to Chicago).