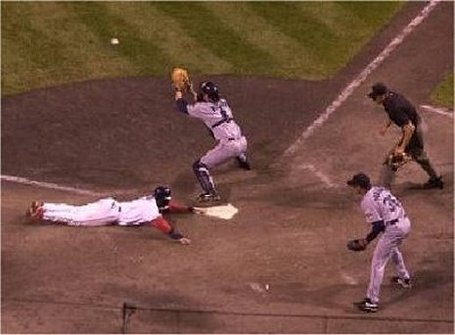 Normally when you think of the greatest single-game comebacks, you don't think of Major League Baseball. A 9-2 game counts as a blowout, and even if a team makes it up, it's still just seven runs. It's not as wowing as the Celtics' 26-point fourth quarter comeback against New Jersey or the Bills' 32-point comeback against Houston.

That being said, an August 2001 game between the Cleveland Indians and the Seattle Mariners is definitely worthy of recognition. The Mariners' Aaron Sele, who was leading the majors in run support, received 12 runs in the first three innings to make the score 12-0. Through six innings, Seattle was leading 14-2. The Indians waved the white flag by removing starters Roberto Alomar, Juan Gonzalez, Ellis Burks, and Travis Fryman. Seattle had won the first two games of the series and would win a record 116 games that season.

Miraculously, this game wasn't one of them.

The Indians scored three in the 7th, four in the 8th, and five in the 9th to tie the score at 14 and send it to extra innings. All five runs in the 9th came with two outs against the best bullpen in baseball. The game-tying hit was from Omar Vizquel, who produced a bases-clearing triple off Kaz Sasaki to even the score at 14-14. The few thousand Cleveland fans faithful enough to stay through the blowout went ballistic.

After a scoreless tenth inning, a recently-traded John Rocker came on in the 11th and struck out the side. In the bottom portion of the inning, Kenny Lofton singled off Jose Paniagua with one out and advanced to second after Vizquel singled. A few pitches later, Jolbert Cabrera -- in relief of Robby Alomar -- knocked a bat-breaking single into left field. Third base coach Joel Skinner waved in Alomar, who slid head-first into home plate a fraction before the ball.

"I had to freeze to make sure it was going to drop," Lofton said. "And when it did, I was off to the races. After I got up off the ground, (Eddie Taubensee) picked me up like a little kid. Man, that was fun."

The 12-run comeback tied the largest overcome deficit of all time, matching the 1911 Detroit Tigers and the 1925 Philadelphia Athletics who also made up a dozen runs to win.

"We had them down with two outs in the ninth," said Seattle manager Lou Piniella, "and they came back and tied it. It's just one of those things that happens. It's almost impossible to do, but they did it."

The Mariners' bullpen had its worst outing in history, allowing 15 hits and 10 runs in only 3-and-two-thirds innings. To put that in perspective, their bullpen had allowed only eight runs in their previous 26 games.

Seattle finished the year one victory shy of breaking the 1906 Cubs' record for wins in a season, which made this loss all the more grueling. The M's got their revenge by beating the Indians in five games in the first round. They then lost to the Yankees in the ALCS, which completely obscured their tremendous season. Even though Seattle had acquired Ichiro Suzuki in the offseason, most analysts were baffled how the Mariners -- fresh off of losing Ken Griffey Jr., Randy Johnson, and Alex Rodriguez -- could somehow improve. They were never taken seriously by the media and weren't even favored to beat the Yankees.

For the Indians, Lofton's game-winning run was the most notable moment of Joel Skinner's third base resume, at least until 2007 when he wrongfully held up Lofton in the seventh game of the ALCS.