Share All sharing options for: Tim Tebow Gets Haze-tastic Haircut From Teammates

DID YOU KNOW: The term "hazing" is actually a portmanteau word, consisting of the words "hair" and "razing"; its origins go back to the days when United States senators would shave their junior members' heads bald the day after their inaugurations!

What's that? You don't believe that story at all? Well then, smart guy, you explain this haircut the Denver Broncos just administered to noted football enthusiast Tim Tebow, rookie from Florida: 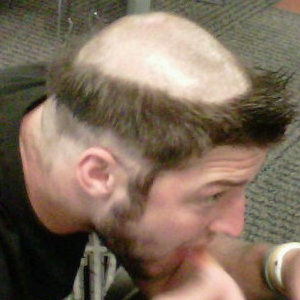 A larger version is after the break. 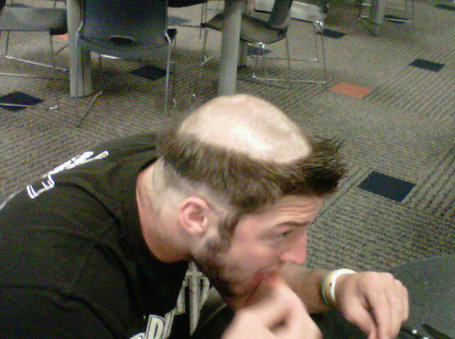 The pic comes via Lendale White's Twitter feed, and there's really no shortage of irony in the fact that Tebow was hazed by someone who's actually been with the Broncos for a shorter amount of time than Tebow has; White didn't even join the Broncos until earlier this week.

What makes this hazing great, by the way, is the attention to detail. Amateur hazers would just shave the hair off the top of the head and call it a day. Not so in Denver. Notice that Tebow's hazers also took care of the hair at the ears and below, creating a magnificent power ring. They also quite clearly took a few chops out of Tebow's beard, while preserving the Monastery Chinstrap. 6 stars out of 5, gents. And Mr. Tebow: please keep this hairstyle for as long as possible. Blaze a new trail.