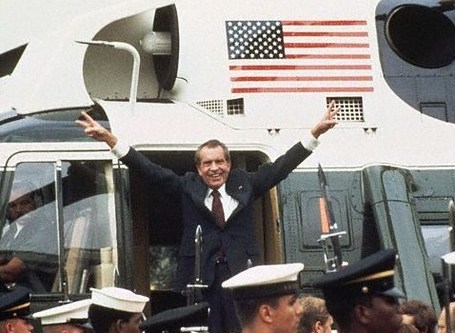 In one of the most infamous moments in political history, Richard M. Nixon resigns from the White House in disgrace, having been outed for his role in the Watergate break-in. The final image of a smiling Nixon giving the victory salute would forever be ingrained in the memories of Americans, many who whom would cite his resignation as the day they lost faith in the U.S. government.

Nixon was a very perplex individual. On the one hand, he was extremely intelligent and had one of the highest I.Q.'s of any president in history. But his character flaws were gigantic, as many of the White House audio recordings revealed. He was in fact so Machiavellian that not only did he conspire to raid the Watergate, he even created an extensive list of enemies that had wronged him in the past.

The Nixon enemy list featured more than 30,000 individuals, most of which were either members of the press or rival political opponents. There were, however, celebrity citings as well. Some of the more prominent Hollywood individuals to get on the list were Bill Cosby, Jane Fonda, Paul Newman, Gregory Peck, Barbara Streissand, Dick Gregory, and John Lennon, who Nixon attempted to have deported from the country.

As for sports personalities, there was only one athlete who managed to make it onto Nixon's master enemy list -- one man who Nixon had given the proverbial thumbs down to...

Joe Namath. Why him and not someone with a confronting political agenda, someone such as Hank Aaron, Jim Brown or Muhammad Ali? It's hard to tell. Namath himself was confused when he learned he was on the list, seeing as he had actually voted for him in 1968 and 1972. Even odder, the list had accidentally listed him as playing for the New York Giants instead of the Jets. 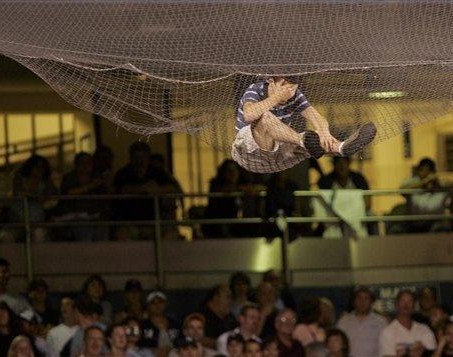 (Harper collects himself after leaping off the upper deck)

In the 8th inning of a White Sox-Yankees game, 18 year-old Scott Harper got his fifteen minutes fame. Much like Patrick Lawler, a man who received notoriety because he didn't know he had a nail in his skull for four months, Scott Harper will not be remembered as "Scott Harper." He'll be remembered as the guy who dove 40 feet off the upper deck of Yankee Stadium and lived to tell about it.

Harper's fall ended when he crashed into the safety net behind home plate. The local YES telecast rattled as the net vibrated the camera line. The game temporarily came to a stop; everyone in the stadium watched as the kid, who was visibly shaken up, began to climb up the net towards the middle section of Yankee Stadium. Harper received a thunderous ovation from the crowd when he reached the seating area and was forcefully pulled away by security.

Harper left the stadium in a stretcher and was taken to a local hospital. When he was released the next day, Scott got a knock on his door from the police. Harper pleaded guilty to reckless endangerment and received three years of probation. Even worse, he was permanently banned from all future New York Yankee home games.

Scott told the police that he wanted to test if the net could hold him and that he was pretty drunk at the time. "It was just like a stupid dare," said one of the friends who went to the game with him. ESPN decided not to air the clip of him falling when they learned it was intentional. Yankees owner George Steinbrenner called the stunt, "the only exciting thing that happened today," noting that the Yankees lost the game, 2-1.

Harper's plunge was not the first time a fan had jumped onto the safety net; Stephen Laurenzi had pulled the same stunt back in 2000.

Three weeks after his dive, Harper was pulled over for speeding in a residential area. He was again arrested, this time for the possession of marijuana. And that was the last of his fifteen minutes of fame. 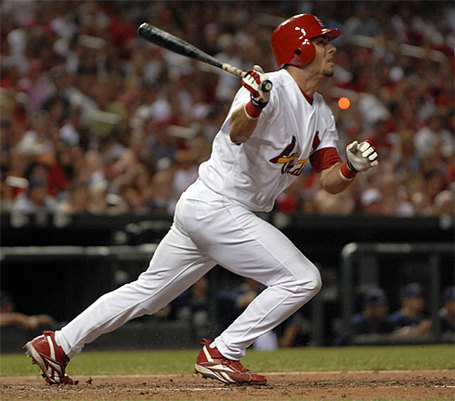 (Ankiel hits his first home run in his first game back after collapse. Photo courtesy of AP)

Rick Ankiel had once been one of the brightest pitching prospects in baseball. But in the 2000 postseason, Ankiel, who was only 20 at the time, completely self-destructed. He couldn't get the ball over the plate, and when he did, the ball sailed ten feet over the catcher's glove. Because of that, he was later banished to the Cardinals' farm system and only resurfaced once as a major leaguer before again getting sent down. After several years in the minor leagues, it appeared that whatever career he could have had in baseball was over.

And yet on August 9th, 2007 -- six years after his last full-time stint as a pitcher -- Ankiel returned to the St. Louis Cardinals as a center fielder. He had abandoned pitching altogether and had found new life as a regular batter; prior to his call-up, Akiel had been leading the Pacific Coast League in home runs.

After several standing ovations from the overjoyed crowd at Busch Stadium, Ankiel proved he was for real. In the 7th inning, he belted a pitch from Doug Brocail into the right field deck for a tear-jerking home run. The crowd went nuts, the Cardinals players were ecstatic, and the visiting San Diego Padres even had to applauding; even the typically sullen Tony La Russa was on the verge of tears. After six years of misery, Ankiel had made it all the way back.

Had Ankiel never played again, his comeback story still would have been great. But Ankiel proved he wasn't a fluke. From August 9th to September 6th, the Cardinals went 17-9 and found themselves in the thick of the NL Central pennant race. Ankiel was a huge part of the Cards' resurgence, batting .358 with nine home runs and 29 RBI during that time. On September 6th, St. Louis was just a game behind the Chicago Cubs and Milwaukee Brewers for the division lead and had all the poise to return the playoffs.

Then, on September 7th, the news dropped. It was reported that Ankiel (along with fellow big-leaguers Troy Glaus and Jay Gibbons) had taken steroids. In 2004, Ankiel had had a 12-month shipment of HGH delivered to his house from a Florida pharmacy. Whether he took the drugs to recover from Tommy John surgery -- as he claimed it was for -- or to cheat, it mattered little. He was no longer the feel-good story of the year.

The revelation of Ankiel's usage utterly eviscerated the Cardinals' playoff hopes. They lost nine straight straight and 14 of their next 16 games. They went from one game back to 10 games behind in a matter of days. Ankiel fittingly fell off the planet, finishing with just a .220 batting average and two home runs the rest of the way.