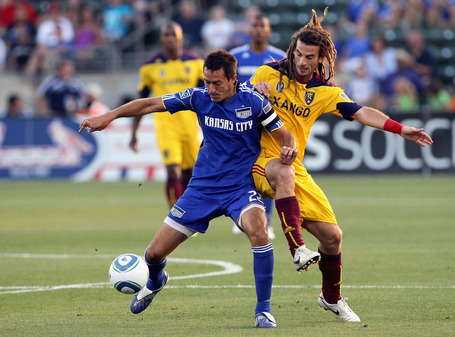 Real Salt Lake was not able to fully take advantage of Los Angeles's off break from league action, drawing with Kansas City 1-1 on Saturday on Kansas. The Wizards scored first through Kei Kamara, with RSL quickly equalizing with a Robbie Findley goal in the 33rd minute. The result leaves the defending Major League Soccer champions four points back of the Galaxy for the league and Western Conference lead.

Kamara's goal came after left wing Ryan Smith beat both Robbie Russell and Ned Gabavoy to get a right-footed cross in from the attack's left flank, 18 yards from by-line. The ball found the head of the only unmarked man, Kamara having three yards of space between himself and RSL central defender Jamison Olave. Kamara's header went into the upper-left corner of goal, beating Nick Rimando in the 21st minute for the match's first goal.

The visitor's goal came off a deep cross from Robbie Russell, his ball sailing from the right flank, 32 yards out to an open Findley, eight yards from goal, just inside the far post. Whether central defender Jimmy Conrad or right back Michael Harrington should have marked the RSL forward, neither was able to prevent Findley from heading the cross down, giving Jimmy Nielsen no chance to prevent the equalizer.

Though Kansas City would outshoot Salt Lake 16-9 for the match, the visitors would have the better chances throughout the rest of the game, with Alvaro Saborio's wayward header in the second half coming within a couple of yards of giving RSL three points. The Wizards had a late shout for a goal, with rookie Teal Bunbury seemly beating Rimando only for the play to be called-back after a contentious offside call.

The draw puts Salt Lake on 35 points through 19 matches, now even on games played with Los Angeles and Columbus, who they trail by two points for the league's second-best record. Kansas City's point moves them to 20 on the season, five points out of a playoff spot.