A pilot doesn’t always end up with a sexy Hollywood call sign like Maverick or Goose. Ensign Steve "Romo’s Bitch" Crowston is one of those pilots.

Crowston’s fellow pilots in Strike Fighter Squadron 136 first suggested "Fagmeister" and "Gay Boy" as potential call signs for Crowston, who was clearly not well-liked within the squadron. Worried those call signs might be too offensive (you think?) they settled on "Romo’s Bitch," referring to Tony Romo, the quarterback of Crowston’s favorite NFL team, the Dallas Cowboys.

First of all, just look at how far this White House has gone. "Fagmeister" and "Gay Boy" aren't acceptable call signs? Next thing you know, our troops'll be dressed in skirts and throwing tampons at the Taliban. COT DAMMIT.

But back to "Romo's bitch." 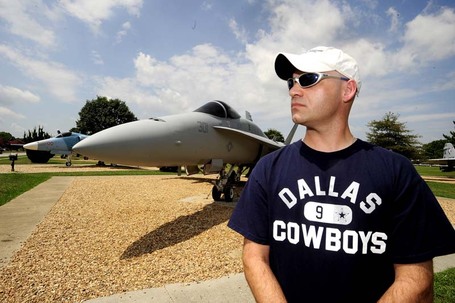 "I was like, wait a minute? What the hell? You think I’m gay? What a way to tell me that," Crowston said of his reaction after his call sign was announced before the entire squadron last year.

Now, is it fair to question someone's sexuality? Of course not. Fair to call someone gay because they like the Dallas Cowboys? Also a negative, ghostwriter. That's why Crowston filed a completely legitimate complaint. But can't you imagine Tony Romo as a centerpiece to that iconic moment in Navy history, the beach volleyball scene from Top Gun?

Slap some tanning oil on him, and Romo and Jason Witten will be out their slappin' each other's asses in no time. "Jessica Simpson can wait. (grins, winks) Gotta finish this game with Iceman..."

Not saying we condone hazing, let alone homophobia, but if you were trying to haze someone, an affinity for Tony Romo certainly provides ample fodder. As a fellow Cowboys fan, I feel Crowston's pain. Though at the end of the day, Steve Crowston's still a Navy Fighter Pilot, which makes him a trillion times more badass than any of us have ever dreamed.

As for Romo, he'll always have that season where he came out of nowhere to dominate the NFL and seemed awesome. Remember? It was right before he fumbled the snap against Seattle... 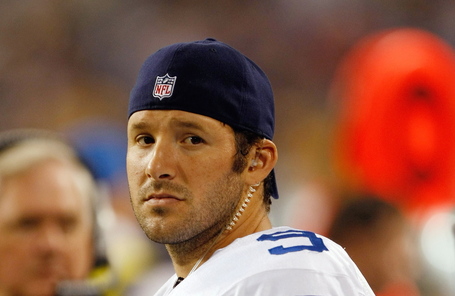