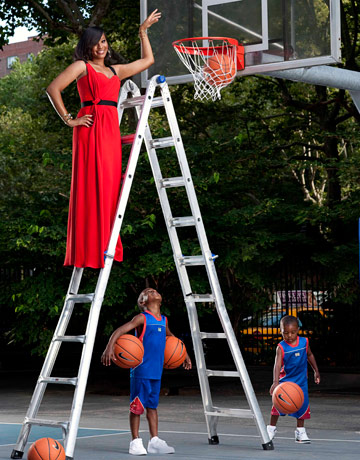 But aside from her failure to explain basic superstitions, LeBron's girlfriend (and mother of his two children) actually seems pretty great in a recent interview and photoshoot with Harper's Magazine. Savannah Brinson, the better half of the man some have dubbed Hurricane F—kface, seems to be completely down-to-earth, and maybe even a little innocent. The polar opposite of F—kface's market savvy Brand Builders.

She avoids the media, takes care of kids, and has a healthy skepticism toward Miami. All laudable. A more cynical observer might snicker at quotes like "I'm the mother of his children ... not a baby mama," but you get the feeling that's really the way it works with them. Which is cool.

For more, including how they met and what Savannah wore to prom, check out the whole interview.

Oh, and some advice for 'Bron's brand builders: less Decisions, more joint interviews with Savannah. And let her do the talking.