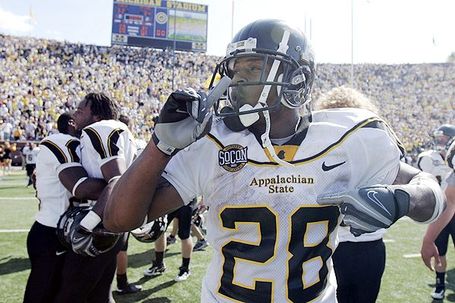 In one of the largest upsets ever seen in college football, Appalachian State, a Division I-AA school, when into the Big House and knocked off the Michigan Wolverines, 34-32. Appalachian State had won the Division I-AA championship two years in a row and were carrying a 14-game winning streak. Still, the fact that a team that anonymous could go in and beat the 5th ranked team in the country was undeniably incredible.

Just the way the Mountaineers pulled off the upset was sensational. In the final 100 seconds of regulation, Appalachian State kicked a game-winning field goal and blocked two, count 'em, two Michigan field goals. The final block occurred in the closing seconds of the game, as Corey Lynch prevented a 37-yard field goal from taking place, and then ran joyously down the opposite end of the field. Never have 110,000 fans been more silent.

Almost instantaneously, talk began if this was the biggest upset in NCAA football history. While some were initially defiant to call a game on the first Saturday of the season the greatest upset ever, the facts certainly pointed to it that way. No Division I-AA school had ever beaten a ranked Division I-A school. Plus it happened to Michigan, the winningest college football school of all time.

The margins of victory are incredible. 59-0, 63-6, 73-10, 79-0! The only ranked teams besides Michigan to lose were Florida State (who lost to Clemson all the time) and Tennessee (who was playing a higher ranked California squad). And gaze at who the elite were playing: Troy, Weber State, Montana State, North Colorado, Youngstown -- these are teams intended to be fed to the lions. Appalachian State was the most unsung of them all, yet they were the only ones to come out alive. 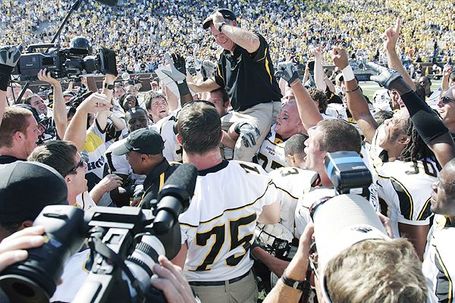 The football poll makers were hardly respective to Appalachian State's back-to-back Division I-AA championships. The next week, Michigan dropped completely out of the top 25, the largest drop in the history of the ranking system. With their season essentially over after one game, calls came furiously for the firing of Michigan coach Lloyd Carr. Carr had been with the team for over 12 years and had even led them to a share of the national championship in 1997, but the loss to essentially a minor league football team was too much for him to live down. Two months later, Carr announced his resignation.

As quickly as the fervent Michigan faithful called for Carr's exit, the calls came almost just as quickly to bring him back. In 2008, Carr's replacement, Rich Rodriguez, led the Wolverines to a disastrous 3-9 campaign, the worst season in the team's 129-year history. Suddenly losing to Appalachian State didn't seem so bad.

In a final bit of trivia, Appalachian State has a connection to one of the most notorious videos on YouTube. In 2007, Miss Teen South Carolina became an instant sensation for her flubbed answer on the question: "Recent polls have shown a fifth of Americans can't locate the U.S. on a world map. Why do you think this is?" Days after her gobbledygook answer, the South Carolina girl told the Today Show that she planned on enrolling at Appalachian St., which -- in case you don't know -- is located in North Carolina.