Nike introduced their new Pro Combat uniforms for the year in a press conference this morning. Pro Combat are the special variation of Nike unis that leaves the unsuspecting college football viewer convinced once a year that they have time-traveled at one point in the past accidentally, tipped over a cup of coffee at the wrong moment, and changed something resulting in TCU playing in reptile-skin print pants or Miami playing in FAMU's pants and jersey.*

*You did time travel accidentally, probably after two-for-one mojito night at Applebee's. Nothing too bad happened, but Bret Favre is playing for Minnesota now. Please update your sports canon appropriately.

The yearly variations usually appear just once, which you'll see is most definitely more than enough for some, and not enough for the better variations on the uniform.

Alabama's uniforms went Houndstooth mad, or at least as Houndstooth crazy as you'll see Nike get with the uniform without inciting Alabama fans to burn down their Eugene headquarters. The numbers feature a gentle wash of Bear Bryant's signature hat pattern on them, and are one of the few tweaks on a uniform Nike clearly handles very, very carefully.

Nike could sell these for $700 a piece and still sell out, because Alabama fans will forego food to purchase Crimson Tide swag.

Boise State's helmet appears to have been stolen from a CFL team. IDAHO IS NOT IN CANADA, NIKE. 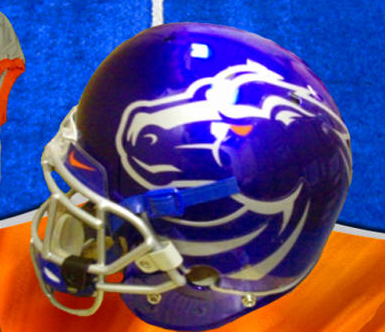 Florida's variation was less CFL-style and not too much of a variation on Florida's home jerseys, though it did feature a particularly smashing set of gloves. 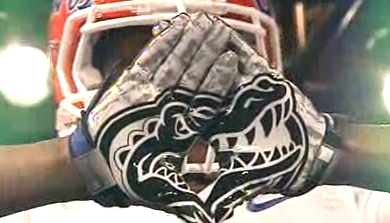 I've already said this, but I repeat: bonus points will be awarded for the first player to wear a pair of gloves with eyeballs painted on the palms who celebrates by holding them out palms-forward over his real eyes.

This entire event was really just a long build for the appearance of Michael Irvin. Irvin, charged with introducing Miami's variation for the year, spent no less than five minutes turning the occasion into a litany of NCAA recruiting violations by openly suggesting the uniform itself was a recruiting tool, and that Miami was fantastic, and that if you played football one might want to go there if you wanted to wear a swanky uniform like this one. 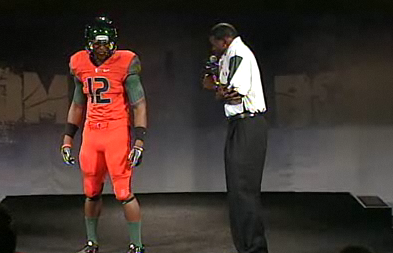 Irvin then patted the model's ass twice on stage, patted Chris Fowler's ass on the way off the stage, ate up all the time for the rest of the presenters, and presumably left to continue his buttock appreciation backstage. Michael Irvin is our poet laureate. Give him stipends to school field days and other mundane events in order to spread his magic across this great land of ours.

Ohio State's uniforms were essentially throwbacks to the 1942 unis, and so was their captain, Charles Csuri. Any time remaining in the presentation was eaten by Csuri talking about the war, and leather helmets, and the Depression, and then walking off the stage without explaining anything about the uniform. In other words, Charles Csuri doesn't give a damn about your uniform, sonny, and you can explain it yourself because he fought in the Battle of the Bulge and his giveadamn gland has been a little low ever since.

(This is precisely what the Nike rep had to do. Charles Csurii is the most Buckeye Buckeye ever, and for that I love him. He's also one of the fathers of modern computer graphics, but he doesn't care if you care, whippersnapper.)

The only other variations of note were the TCU reptilian model and the WVU Coal Shaft unis. Somehow TCU's got even scalier this year after last year's Horned Frog tribute model.  Alter the Horned Frogs' uniforms toward the realistic anymore, and the helmets will have to shoot jets of blood while the pants waggle a tail behind them. 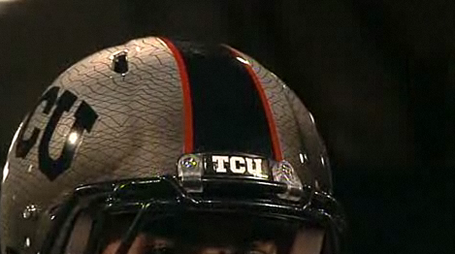 The red stripe? That's for blood. Dont' think it won't actually bleed real blood next year. As for WVU's coal dust unis, they really are the hardest college football uniform I've ever seen, deliberately dark, sooty, and highlighted only by the yellow stripe representing the coal miner's lamp in the dark. In case the point was not made, the uniform contains a tribute to those killed in the Big Branch mining accident last year.

WVU will wear these against Pitt in the Backyard Brawl this season. If the matchup is settled based on intensity of uniform alone, Pitt is going to die.

Virginia Tech's finished up the show, are here, and were clearly designed by a mad Russian supercomputer.