When all you get in the first period is a field goal, it's time to turn to the sidelines, which on this night at FedEx Field are being roamed by the likes of Dale Earnhardt Jr., a noted Redskins fan, and LeBron James, who apparently is a Dallas Cowboys fan. 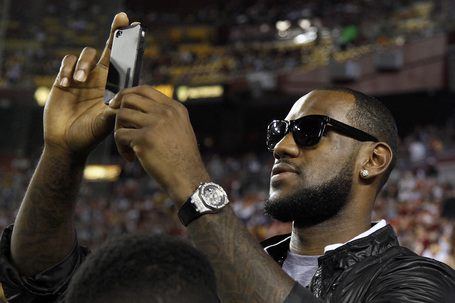 In DC for My Cowboys game tonight. Gonna be a lot of sad faces tonight in this area. Lol!!less than a minute ago via Echofon

And yes, you read that right earlier -- LeBron James is a Dallas Cowboys fan, not a Cleveland Browns fan. Nor is he a Miami Dolphins fan.

Speaking of Cleveland, he was sure to make another joke at the city's expense, since the Cavaliers' team colors are somewhat similar to the burgundy and gold outfits the Redskins are wearing this evening.

All of this Maroon and Yellow is making me sick to the stomach! Haaa http://twitpic.com/2nwn3vless than a minute ago via Echofon