The Phillies were 2.5 games back of the Braves when Roy Oswalt made his debut in the uniform. They were, unquestionably, already on a hot streak, having won their last eight games to gain considerable ground, but they were still behind, and in need of a boost. Momentum doesn't seem to be a critical factor in baseball. As the Braves were in first in the division, it was the Braves who had the highest odds of making the playoffs.

And then Oswalt arrived. Yeah, the Phillies lost his first game. But they haven't lost one since, going 8-1 when Oswalt's pitched. Oswalt's allowed just 15 runs over 63.2 innings for Philadelphia, four times keeping the opposition off the board, and that's provided the team with a tremendous lift.

That's a pretty stark difference, and so it should come as little surprise that, while the Phillies were 56-46 before Oswalt showed up, they've gone 30-15 ever since. He's helped to raise their pitching staff from good to great, and remember they've performed like this despite pitching half their games in a hitter-friendly park.

The more you look at that post-Oswalt stat line, the more impressive it becomes. The top ERA in baseball belongs to the Padres, at 3.38, but the Padres play in a batter cemetery, while the Phillies play in a snare drum. The top FIP in baseball is a tie between the Padres and the Braves at 3.66, a mark the Phillies have recently exceeded. And, perhaps most impressively, the top K/BB in baseball, outside of Philadelphia, belongs to the Twins, at 2.8. The Phillies, overall, are number one at 2.9, but since Oswalt arrived, they've come at a 3.6 clip, which just blows the Twins away.

It's plain to see what makes the Phillies so terrifying. Nevermind that their offense is so potent. They have a rotation fronted by Roy Halladay, Cole Hamels, and Roy Oswalt - three of the absolute top starting pitchers in baseball. That's a difficult rotation to crack in the regular season, and should the Phillies go on to qualify for the playoffs, it'll put them at an incredible advantage in October. Yes, their pitching staff is unbalanced. But as the Yankees demonstrated a year ago, you don't need to have a balanced pitching staff to succeed in the postseason. You can lean very heavily on your top arms, and the Phillies' collection of top arms is as good as any in the league, if not better.

We laughed when a peculiar series of events led to Ruben Amaro having to trade away Cliff Lee to get Halladay. No matter what the more distant future might hold for the Phillies, though, there's no denying the position they've gotten themselves in in the present. The Phillies, again, look like the top team in the National League, and one of the very top teams in baseball. Good luck to anyone who has to get through this team the rest of the way, because luck might be the best recipe for success. 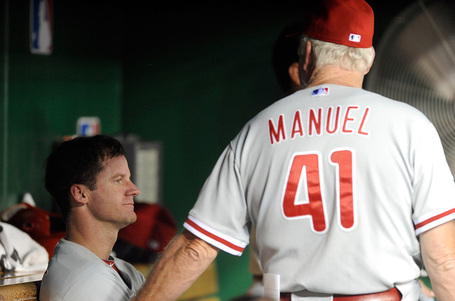