Russell Wilson first pump-faked Patrick Lambert out of his shoes for an easy, floaty lob into the endzone to put NC State up 7-0, and then floated a string of paces down the field to draw an interference penalty. The subsequent TD run by Mustafa Green took the lead to 14-0, which will happen when you allow Wilson to pass for 154 yards in a quarter. 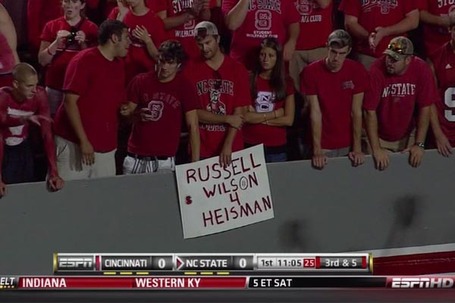 If you gave out "Week Three Single Quarter" variations of the award, yes, but the complete disarray on Cincinnati has to be noted in the award ceremony. Cincy's only break on the game came from a tipped Wilson pass, which then landed in a Wolfpack receiver's hands, which then left those hands in a fumble and was recovered in the endzone for a Bearcats touchback. Other than that, it's been wall-to-wall horror in the 1st for Cincy.