North Carolina State Vs. Cincinnati: Dragging To A Finish

Share All sharing options for: North Carolina State Vs. Cincinnati: Dragging To A Finish 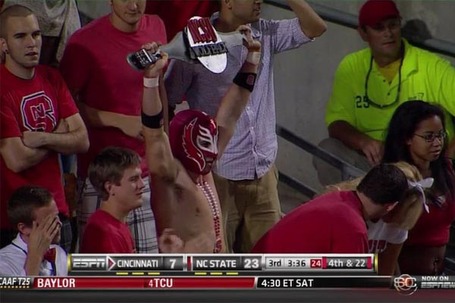 Let's start with positives. Russell Wilson rebounded from a bad outing versus UCF last week with a 26/40 performance for 333 yards and 3 TDs. The Wolfpack controlled the line of scrimmage, smothered pass routes, and hounded Zach Collaros into a miserable nub of the quarterback he was last year by sacking him five times. Mustafa Green helped them run out the clock with firm running, and NC State checks out of an uneventful second half with a clean 30-19 win that was nowhere near as close as the score indicates.

Now the negatives, which encompass the entire Cincinnati football team and everything they did tonight. They gave up three sacks on one drive. They called a timeout only to successfully have a punt blocked. They fumbled four times and lost four. They scored their final TD in garbage time, went for a nonsensical two-point conversion, and then scored and went for it a dubious second time. They were uniformly ineffective for the bulk of the game's sixty minutes.

It was a horrid third game for Butch Jones, and one that is probably best forgotten as quickly as possible.