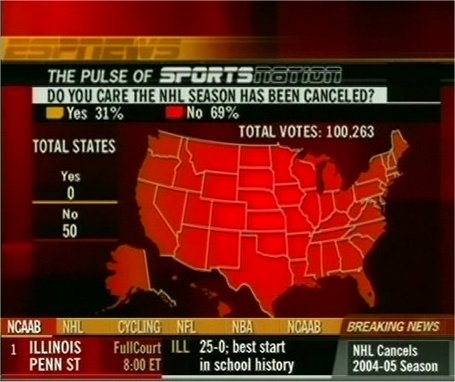 The National Hockey League was, and still is, a very niche sport. Prior to 2004, the NHL was considered one of the four major sports leagues in the United States, along with the NFL, MLB, and NBA. They were always a distant fourth though. In the 1990's, as the NBA and MLB were able to pull in twenty million viewers for their championship series, the NHL struggled to pull a 5.0 Nielsen rating.

At the turn of the century, the league steadily began to lose large chunks of its loyal fanbase. Expansion had taken teams away from cities like Hartford and Winnipeg, cold towns who enjoyed their hockey, and moved them to Nashville, Atlanta, and Phoenix, where they were ignored in the sports landscape. Even the traditional hockey teams were struggling to stay afloat. The Buffalo Sabres and Ottawa Senators both declared bankruptcy, and the Pittsburgh Penguins might have gone under had Mario Lemieux not come out of retirement.

There were further issues as the league pondered its status in 2004. The big market teams (Los Angeles, Chicago, New York) weren't competitive at all. The NHL's national carrier, ABC, had undergone a shift where ESPN, their sister channel, was in charge of their sports presentation. ABC's lax approach on athletics included sparse advertising, few games, and a bland in-game presentation that lacked the authenticity of ESPN. The sports that ABC carried (golf, pro football, college football, NBA basketball, college basketball) all took giant nosedives in viewership, and the NHL was no exception. In 2004, the Stanley Cup Finals posted a pathetic 2.6 rating.

These concerns did not go unnoticed by NHL commissioner Gary Bettman, who reported that the league lost $497 million from 2002 to 2004. Bettman and the team owners proposed a "cost certainty" tactic that would limit team spending and reduce the average salary from $1.8 million to $1.3 million. The NHL Players' Association strictly opposed the notion of a salary cap, leaving the league's future in purgatory. With the season fast approaching, and the binding contract between both sides set to run out, a lockout seemed imminent.

On September 15, 2004, the collective bargaining agreement between the owners and the NHLPA officially expired. With no resolution regarding the players' salaries, and no present CBA, the anticipated work shortage commenced the following day, as Gary Bettman announced the cancellation of the season. It was the NHL's first labor dispute since the 94-95 campaign, when a 103-day lockout reduced the season to 48 games. 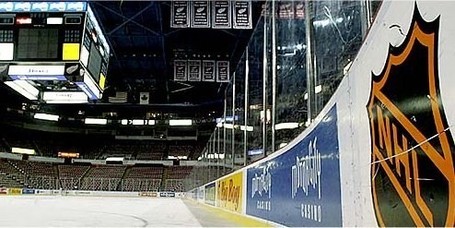 In Canada, where hockey was by far the most popular sport, the loss of the NHL was a huge blow. Hockey Night In Canada, the Canadian equivalent of Monday Night Football that was one of the most watched programs in the country, disappeared from the schedule. CBC, TSN, and other stations compensated by airing independent and junior league hockey games, which saw large spikes in coverage and attendance.

More than three hundred players and referees migrated to Europe, where they played despite a significant play cost. Others stayed inside the mainland and barnstormed throughout the independent hockey circuit, while some found new work all together. The only NHL that fans got to experience came in the form of video games, which produced simulators for the ghost season.

While the vanishing of professional hockey could be described as a tragedy in maple leaf territory, life went on as usual in the United States. As the image at the top of the article infers, most Americans simply didn't care about hockey. NHL highlights had been relegated to the back of SportsCenter for years, and the regular season would only get attention from the occasional hockey fights. In fact, the strike was giving the league the most mainstream coverage it had received in years.

Many analysts expected the lockout to last through the entire season. Both sides were steadfast in their stances and negotiations didn't pick up for another two months. In December, the NHLPA handed Bettman their first legitimate attempt at a compromise. The proposal would enact a 24% pay cut from every player and induce other concessions from the athletes. It did not, however, include a salary cap, and the NHL immediately rejected the concept.

While the plights of the billionaire owners got no sympathy from the fans, the players weren't exactly sided-with either. If limiting team spending worked in the NBA and NFL, then it certainly seemed necessary for the NHL, who posted lower ratings than even Arena Football League games. Twenty of the thirty teams were in the red and the league had lost nearly $2 billion over the past decade. As Norman Chad of the Washington Post put it, "NHL players have all the leverage of a PETA member at a cattle ranch."

In February 2005, representatives from both sides met in what Gary Bettman described as a final attempt to save the season. Negotiations went on for ten days and the players' union at long last consented to the prospect of a salary cap. The NHL, whose initial cap had been at $31 million, raised their offer to $42.5 million, while the union insisted on a $49 million limit. Again, no deal was brokered, and Bettman was forced to relay the news to his retreating fanbase on February 16.

"It is my sad duty to announce that because a solution has not yet been attained, it is no longer practical to conduct even an abbreviated season," Bettman said. "Accordingly, I have no choice but to announce the formal cancellation of play." "You want to know how I feel? I can summarize it in one word: terrible."

The news circulating the labor discussions were all over the place that day; Bettman admitted that he had prepared two announcements, including one if his proposals were consummated. Only a few days later, a rumor circulated that the two sides had picked up talks and were inches away from a truce. Just as quickly, the negotiating died, as did the season.

"Look," Bettman said, "Would I suffer the embarrassment of another press conference in four hours to save the season? You betcha. But that isn't going to happen. So you can consider this final."

It was a first for an American sports league. Never had an entire season been canceled. All 1230 games were gone, as was the All-Star Game, as was the Stanley Cup Final. It was the Final's first cancellation since 1919, when a flue epidemic forced players to stay home.

Conversing eventually resumed and at long last, on July 21, a new collective bargaining agreement was put in play. After 301 days, the standstill was over. The owners received the $39 million salary cap that they had been fighting for, while the players got their old jobs back. There were reasonable advantages and disadvantages for both sides, though the loss of an entire season, which cost the league an additional $2 billion, was not acceptable.

One man who got more than his share of the blame was Bob Goodenow, the head of the Players Association. It had been Goodenow who so adamantly rejected the idea of a salary cap, only to find himself accepting it. Not only did the union agree to the owners' demands, Goodenow had passed on a far better deal in February, one where the salary cap was larger, the players got a greater percentage of league revenue, and (most importantly) the season wouldn't have been canceled. Instead, a lesser arrangement was accomplished in which every player lost an entire year's worth of salary.

Six days after the announcement of the new CBA, Goodenow resigned. His exit added further controversy when it was reported that his severance package from the NHLPA was worth $8 million.

The league underwent several cosmetic changes in the hope of recapturing their old fans and reeling in new ones. The shield logo got a silver update in the color of the Stanley Cup while the letters read upward, facing the future. There were rule changes abound as the NHL tried to make the game more appealing and higher-scoring. Goalies' pads and gloves were reduced in size, long two-line passes were legal, and the neutral zone was extended. The biggest amendment was the addition of a shootout, which assured that games couldn't end in a tie.

The NHL's comeback was a successful one. In the first post-lockout season, attendance skyrocketed and arenas were filled to record capacity. Scoring increased by over one goal a game and the shootout, in the absence of a three-hour tie, was a welcome improvement. With the cost certainty formula in place, the NHL earned over $2 billion in revenue in 2006 and made up for the heavy losses they incurred over the past decade.

But while the NHL thrived by reclaiming the hardcore fanatics, the casual fans stayed away more than ever before. In the absence of the NHL, ESPN had been filling their schedule with loads of college basketball games. And when ESPN discovered that they could get higher ratings from the college games, they ended their 21-year partnership with the NHL.

So in 2005, the NHL signed on with a different pair of national TV and cable providers. NBC replaced ABC as the main Stanley Cup televisor, while the bulk of the hockey games went to OLN, a third-tier cable network best-known for their coverage of the Tour de France. The ensuing years on OLN, who later changed their name to Versus, weren't pretty. Even though they devoted far more air time and coverage than ESPN ever did, the channel was so unknown, so nondescript that even the people who had the channel couldn't find it.

When NBC was forced to air Game 3 of the 2006 Stanley Cup Finals, they received the smallest national viewership for a prime time event in TV history. They eclipsed this dubious distinction only one year later, with an even worse 1.1 rating. Versus wasn't carrying the load either; the 2007 All-Star Game, on cable for the first time in two decades, produced the most embarrassing numbers in league history. Only 474,298 households tuned in to the All-Star game, which got beat in the ratings by softball on ESPN2, Top Chef reruns on Bravo, and a 40 year-old episode of the Andy Griffith Show on TV Land.

In 2008, the NHL started to return to respectability. Featuring loyal hockey towns Pittsburgh and Detroit, as well as the hottest star in the league, Sidney Crosby, the Stanley Cup Finals did very well. The Red Wings' closeout victory in Game 6 was watched by 7 million viewers, the most for a hockey game in five years. 2008 also saw the first outdoor NHL game ever played inside the United States. The Winter Classic drew more than 70,000 Buffalo fans to watch the Penguins beat the Sabres in a thrilling shootout.

''It was a cool experience. Everybody was so into it and dialed in to watching a hockey game. It was kind of a party atmosphere, everyone in different sections interacting and laughing and having a good time," said Sabres guard Ryan Miller. ''That's what we feel hockey is all about.''