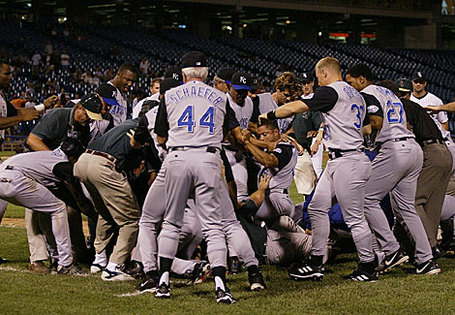 (The Royals come to the aid of Gamboa. Photo by Ted S. Warren, AP Photos)

The United States rarely accommodates the fan violence seen in some European countries. Over there, fans have rioted the field, thrown flares at the players, and have even been in altercations that resulted in multiple fatalities. American sports fans don't have nearly as bad a rap sheet, save for one night in September 2002.

The Kansas City Royals were leading the Chicago White Sox 2-1 in the ninth inning at US Cellular Field. That was when two shirtless men ran out of the stands and attacked Royals' first base coach Tom Gamboa. The Kansas City dugout leaped from their seats and separated the duo from the 54 year-old coach. The perpetrators were led out of the stadium and into a police vehicle; Gamboa suffered several cuts and bruises and left with permanent hearing damage to his right ear; an unfolded pocket knife was found at the scene.

The culprits were identified as 34 year-old William Ligue jr. and his 15 year-old son. As Ligue was being escorted out of the park, he told reporters, "(Gamboa) got what he deserved." He claimed that the first base coach had given them the bird and was taunting them throughout the game. "At no time, no matter how bad it got, have I ever made a hand gesture or verbally done anything to the fans," Gamboa insisted.

There was no visual evidence that Gamboa had done anything to provoke the Ligues. However, what was true was that the elder Ligue called his sister minutes before the assault and told her to turn on the TV -- presumably to see him in action. 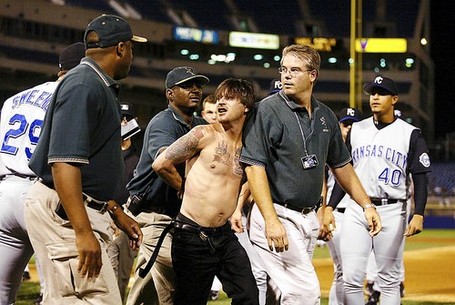 "It's 15 minutes of fame for a no-name guy," Gamboa stated. "It's like I'm today's Kato Kaelin. Ten years from now, somebody will point to me and say 'That's the guy who was attacked.' Nobody likes to be remembered for that. I'd like to be appreciated for the job I do."

To his credit, Gamboa had spent 25 years as a minor league manager, and made it all the way to the big leagues as a base coach in 1998. However his portfolio could not eclipse what was the worst case of fan-athlete violence in the country's history.

Much like the psycho who stabbed Monica Seles in 1993, both the father and son got off with a very lenient sentence. The dad was given 30 months of probation and a 90-day curfew, while the son somehow received a longer probation sentence of five years. The dad was later given a five-year jail sentence for hijacking a car and leading the police on a chase, while the son was later charged with the shooting a 20 year-old man.

The Kansas City Royals didn't again play in Chicago until April of the next year. When they did visit, the seemingly-isolated case of a couple bad White Sox fans appeared to be becoming an epidemic. On four occasions, a fan ran onto the field and delayed the baseball game. In the last occurrence, a drunken spectator jumped onto the field and ran at umpire Laz Diaz. The fan later admitted that he did it merely to upstage the three previous trespassers, saying, "I wanted to do something that would stick out a little more."

Diaz was in far better condition than Gamboa to defend himself. The ex-Marine handled the trespasser easily -- with the help of several of the players -- and the fan left with a gash on his head and blood splattered on his t-shirt. Adding insult to injury, he was later given six months of jail time. 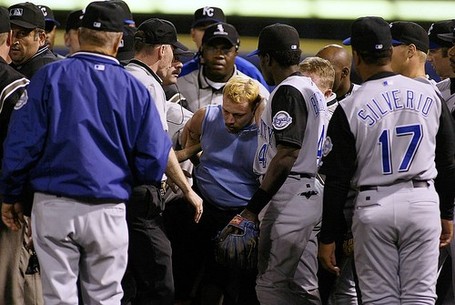 (The fan who bolted at Laz Diaz is hauled away. Photo by Ted S. Warren, AP Photos)

The incidents at US Cellular Field razed some valid questions about Major League Baseball. Is there enough security to properly ensure the players' safety? Is there a strict enough limit on the amount of alcohol that can be purchased at a ballpark? And is there a point when unruly fans have to be ejected before they do something violent?

On a side note, September 19th turns out to be a somewhat historic day for violent lunatics. On September 19, 1881, president James Garfield died -- it was 79 days after the assassination attempt by Charles Guiteau. And on September 19, 1995, the Unabomber had his Manifesto published in the New York Times and Washington Post.