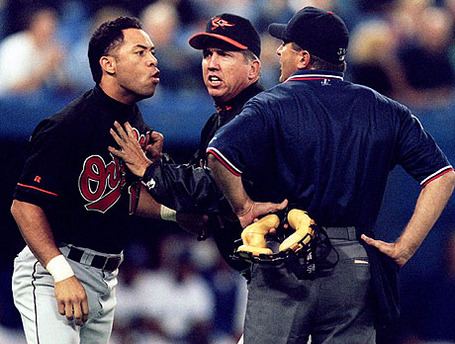 Over the course of his 17-year career, Roberto Alomar established himself as the best second baseman in baseball. He won 10 gold gloves, recorded 2724 hits, stole 474 bases, and was a 12-time All-Star. But if he isn't voted into the Hall of Fame in 2010, it will be because of the lingering memories of one transgression he committed in 1996 -- an error that if not for a few labor agreements could've canceled that year's postseason.

It was the first inning and his Baltimore Orioles were playing in Toronto. Umpire John Hirschbeck struck out Roberto on a called third strike. Alomar went ballistic, firing a series of brutal insults before manager Davey Johnson could interfere. Alomar, who was ejected by that point, suddenly spit right at Hirschbeck's face, prompting further bickering before the second baseman could be hauled away.

Alomar later said he was prompted to spit on Hirschbeck when the ump began using racial insults, particularly one about his mother. Hirschbeck denied this claim, saying that if he used any vulgar language it was after he was spit on, not before. Davey Johnson never divulged what he heard at home plate, only saying, ''I think they're both guilty."

Alomar instantly became a media pariah for spitting at an authority figure. His post-game comments incited even more criticism. ''I used to respect him a lot. He had a problem with his family when his son died -- I know that's something real tough in life -- but after that he just changed, personality-wise. He just got real bitter.''

Hirschbeck's eight-year old son, John Drew, died in 1993 from ALD, a rare condition that causes inflammation of the brain. His nine-year old son, Michael, was diagnosed with the same inflection. When Hirschbeck got wind of Alomar's comments the next day, he rushed into the Oriole's clubhouse shouting that he wanted to "kill" him. The other umpires had to race in and restrain him.

AL President Gene Budig suspended Alomar for five games, but Roberto appealed the suspension and was allowed to play in his team's final two regular season games. Hirschbeck took the next day off and watched in dismay as Alomar hit the game-winning home run in the tenth inning, officially giving Baltimore their first playoff berth in a dozen years.

Following the regular season, the umpires' union threatened to strike. They were outraged by the paltry suspension Alomar had received, that he would be payed for all five games, and that his suspension wouldn't go into affect until next April. The Orioles' first divisional playoff game against the Indians was delayed seventeen minutes because the umpires refused to take the field. Alomar then dropped his appeal.

Major League Baseball, fearing that a strike could cancel the World Series for the second time in three years, sought an injunction from a federal judge. Judge Edmund Ludwig ruled that the umpires could not strike because it would violate the labor agreement they signed with MLB in May of 1995.

Baltimore beat the Indians in four games and faced the New York Yankees in the next round. Alomar had been ferociously booed by the fans in Toronto and Cleveland. New York mayor Rudy Giuliani pleaded the Yankee faithful to not boo Alomar, but to instead give him in the silent treatment. It didn't work. In the end, karma caught up with Alomar and the Orioles, as 12-year old Jeffrey Maier had a hand in defeating Baltimore four games to one.

Alomar apologized to Hirschbeck that October, and the two have since reconciled their differences. When they faced each other for the first time since the spitting incident, Alomar shook hands with Hirschbeck. The two now claim each other as friends. Michael Hirschbeck was a batboy with the Indians during Alomar's three-year stint with Cleveland, and Alomar has donated money to Hirschbeck's foundation dedicated to fighting ALD.

"If that's the worst thing Robbie ever does in his life,he'll lead a real good life," Hirschbeck said. "People make mistakes. You forgive, you forget and you move on."