The Detroit Pistons may have made their big splash of the offseason by picking up Brandon Knight in the June draft.

The Detroit Pistons added an impact rookie last year in Greg Monroe, and hope they have another in Brandon Knight. Now: what do with all of the teams other needs and expensive veterans?

Here's a look at the Pistons' salary cap levels over the past six seasons. 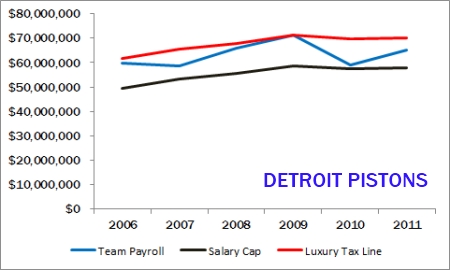 Under the Davidson family, Detroit stayed under the luxury tax. Of course, that didn't keep the Pistons from elite status most of the time. Since Detroit's fall from the elite, the team's salary level has decreased notably.

Heading into free agency, the Pistons have a cap figure of $48 million with the leaguewide team salary cap set at $58 million and the luxury tax line at $70 million. Use of the amnesty clause is unlikely, but could drop that enough to the point where the Pistons would become players for major free agents.

The Pistons' free agents are:

McGrady is already reportedly betrothed to the Atlanta Hawks. There's little to no chance Prince returns; he could end up with the L.A. Clippers or another team that strikes out on Caron Butler. Wilcox is also unlikely to return, and Summers isn't anyone's priority.

There is strikingly little buzz about Stuckey, once the perceived future star of the Pistons. Though Detroit has Knight, Will Bynum, Rip Hamilton and Ben Gordon in the backcourt, if the offers are low or nonexistent, the Pistons could keep Stuck and figure it out later. There's little chance that Joe Dumars will let Jonas Jerebko loose; the Swede missed all of 2010-11 after a standout rookie campaign, and while there's interest around the league, Detroit should be in position to keep him.

The Pistons say that they will not be using amnesty on either of the team's top candidates (Charlie Villanueva, Ben Gordon); as such, the team's salary is going to be near enough to the cap after re-signing Jerebko and perhaps Stuckey that they won't be involved in many free agent rumors. But with Ben Wallace contemplating retirement at the age of 57, and Wilcox slipping into the cold night, another big man is needed. Villanueva is not a proper fit with Monroe as a starter.

A Stuckey sign-and-trade for a garbageman-type power forward could be in the cards. Small forward could also be a position to upgrade, assuming Jerebko plays more four and Austin Daye doesn't leap over the wall.