Surely this will be the time that the Philadelphia 76ers trade Andre Iguodala, right?

The Philadelphia 76ers returned to the playoffs in Doug Collins' first season at the helm (this time), but are seen as well below the level of the Eastern elite. Free agency in 2011 has the Sixers playing defense with two key restricted free agents before the team can hope to improve its roster.

Here's a look at the Sixers' salary cap levels over the past six seasons. 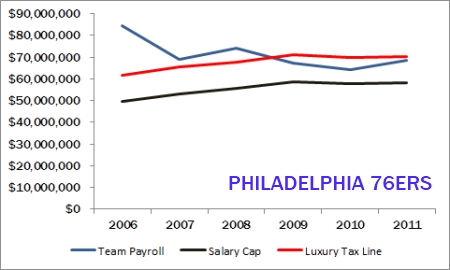 After the break-up of the Allen Iverson-Chris Webber unit, the Sixers have stayed below the luxury tax. It's perfectly unclear what type of owner Josh Harris will be with respect to the threshold.

Heading into free agency, the Sixers have a cap figure of $54 million with the leaguewide team salary cap set at $58 million and the luxury tax line at $70 million.

The Sixers' free agents are:

Young, one of the league's best reserves a year ago and still green enough to blossom into a stud, is a must-keep. The preferred route for Philadelphia is to lock him up to a sensible deal quickly. But even if he reaches the market and signs a gross offer sheet, the Sixers don't have much choice but to match. The team can't move up the standings if it hemorrhages critical talent.

Hawes is less vital, but given the team's lack of frontcourt depth, keeping him around on a multi-year deal would be prudent. (He's also young enough to blossom; he'd had four head coaches in four years in the NBA.) Kapono is already gone, ready to sign with the L.A. Lakers. Battie and Daniels are useful veterans that remain low on the shopping list.

Andre Iguodala owns property on the rumor mill. Might as well buy if you're going to be there six months out of the year, right? Evan Turner began to build confidence into the playoffs, and with Young likely to stick around, there's a natural question of whether that which Iguodala does (defend, make plays, kill in transition) can be replaced at a much cheaper price. But with Turner just beginning to elbow in and Young thriving as a reserve combo forward, that can wait.

Andres Nocioni appears to be done with the NBA; whether he'll be retiring or seeing an amnesty waiver is unknown. He wouldn't factor into the roster issues either way, but dropping his salary would help the Sixers keep Young and Hawes while maintaining some flexibility under the tax.